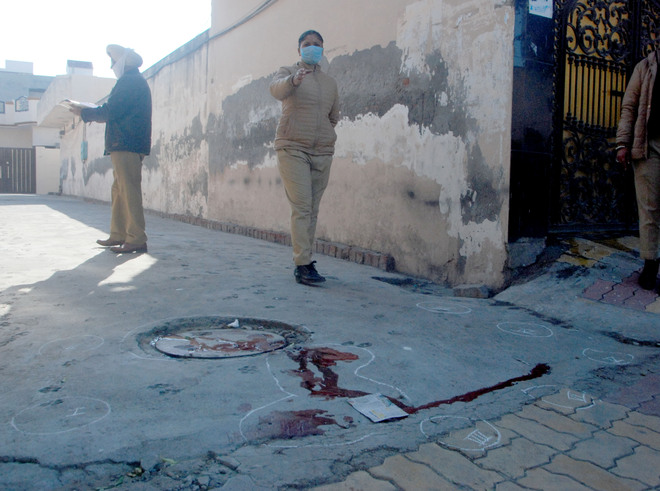 Policemen investigate the spot where Mani was shot dead by unknown assailants in Amritsar on Friday. Photo: Sunil kumar

Gang rivalry claimed the life of Mani Dhawan, brother of gangster Sunny, alias Gorilla. Mani was gunned down by two assailants at 88-Feet Road on Majitha Road in broad daylight on Friday. The victim was basking in the sun near his shop, as there was no customer in the afternoon. Seven rounds were fired at him killing him on the spot.

Cops suspect rivalry between one Shubham and Simran as the reason behind the incident. Both have killed each other’s fathers in the past. Gorilla was the member of Simran gang and was currently in jail.

Past rivalry to blame

Shubham and Simran’s rivalry started in 2015. Shubham shot dead Simran’s father in 2016. He used to run a dhaba on Majitha Road. To avenge his father’s death, Simran shot dead Shubham’s father, a former cop, in 2018. Similarly, Shubham, along with his accomplice Saraj Mintoo, killed a Hindu leader Vipin Sharma on Batala Road, who allegedly gave shelter to Simran.

Police Commissioner pointed out that the incident seemed to be an outcome of personal enmity. He said CCTV cameras in the area were being checked. He said the police have some vital clues about the perpetrators and they would be arrested soon.

Varun Kumar, an eyewitness, said as there was no customer, Mani was sitting in the sun opposite his bike-repair shop. He said some bike-borne people came to Mani. He tried to escape but was shot dead by them.

A paint shop owner, another eyewitness, said he heard the gunshot and immediately came out of his shop located just opposite to the crime spot. He said he saw two youth escaping on a bike after shooting the victim. One of the accused, who was riding pillion, had covered his face with a mask. While escaping from the spot, they fired a couple of shots in the air.

Another eyewitness said the suspects fired from behind. Mani sustained bullet injuries on his head and back. He was rushed to the hospital, where doctors declared him dead. The police have recovered empty shells from the spot. Deceased’s family members have, however, named two people — Tinku Bangali and Sonu. Parveen Kumar, SHO Sadar police station, said a murder case was registered on the statement of Ramesh Kumar, uncle of the deceased. He said all entry and exit points of the city have been sealed so that the accused could not escape.

Deputy Commissioner of Police (investigations) Mukhwinder Singh Bhullar said they would bring Shubham, currently lodged in Faridkot Jail, on production warrant for further investigation. He said investigations carried out so far reveal that two youths belonging to Gurdaspur and Chheharta here, were behind the brutal murder of Mani Dhawan. He said they would verify whether they are the same people whose names have been given by the family members or not.