Locals give thumbs up to beautification of Hall Bazaar street 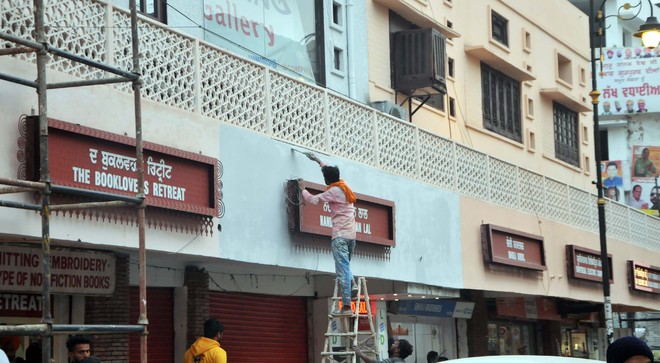 Beautification of commercial area of Hall Bazar is on in Amritsar. tribune photo

Residents and businessmen have hailed the beautification project being carried out along the entrance street of Hall Bazaar, which leads to the Golden Temple.

The project has been initiated by the Punjab Heritage and Tourism Promotion Board under the Infrastructure Development Investment Programme for Tourism with the assistance of Asian Development Bank.

It involves creating heritage facades on the shops along the entire street directly the way it was carried out in Heritage Street, at a cost of Rs14.97 crore.

The entire street from Hall Bazaar to Heritage Street and Golden Temple and from Katra Jaimal Singh to Sikandari Gate is being made with a uniform design.

“After the development of Heritage Street, the tourist inflow in the Hall Bazaar area has increased a lot. Besides, the footfall of locals has increased. It is a good initiative to improve the look of one of the busiest routes in the city and a commercial lifeline as well,” said Bhuvan Arjun, the owner of Arjun n Sons at the main Hall Gate entrance lane.

Several businessmen inside the lane share the similar opinion as the beautification of the street means more tourists will prefer for walk in tours.

Another local resident, Jairam Sharma, said though delayed, the facelift would also improve the cleanliness around the area. “Maintenance of the entire stretch will also be carried out in a similar pattern of Heritage Street. The city needs to create such beautified spaces with the heritage character to ensure that the tourism industry sustains,” he added.