Claims shopkeepers did not complain against Fire Dept 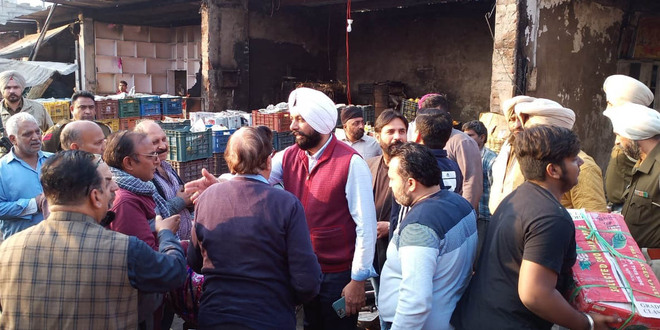 Mayor Karamjit Singh Rintu with shopkeepers whose shops were gutted in fire, outside Hall Gate in Amritsar on Saturday. Tribune photo

Mayor Karamjit Singh Rintu on Saturday visited the fruit market where 29 fruit shops were burnt on Friday. Rintu claimed that shopkeepers did not complain against the Fire Department. He took note of news reports that the fire tenders did not reach the site on time and talked to people in the market.

The Mayor claimed that the Fruit and Vegetable Market Association office-bearer Harish Taneja, former councillor Rakesh Madan and victims claimed that news reports of the fire tenders not reaching the site on time were not true as they did not have any such complaint. However, Karmajit Singh Rintu assured that they would conduct an inquiry into the matter and the guilty would be punished.

“There have been reported around 350 fire incidents in the last two years. Personnel of the Fire Department controlled the fire with courage and saved human lives and goods worth crores of rupees.

The Mayor urged the shopkeepers to arrange their shops in a manner that a fire incident did not take place again. He also suggested them not to keep flammable things in their shops. The shopkeepers association demanded compensation and cleanliness around the market. The Mayor instructed Executive Engineer Sandip Singh to remove building material from the ground immediately and maintain cleanliness.

It is worth mentioning here that a major fire broke out at fruit shops and vends outside the Hall Gate in the wee hours on Friday. Around nine shops and 20 vends were gutted within an hour. However, no loss of life has been reported. OP Soni had also visited the market on Friday.