Pak drone shot down near IB : The Tribune India 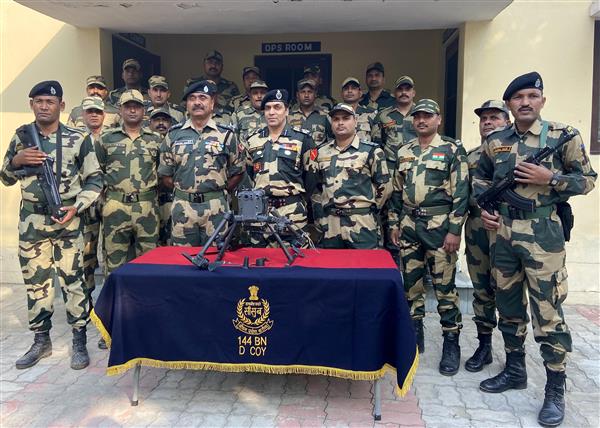 BSF jawans with the drone confiscated on Saturday. Sunil Kumar

Alert BSF jawan foiled a drone intrusion bid and shot down a drone which entered into the Indian air space in Dauke village located near the International Border (IB) in Attari sub-division here last night.

The China-made quadcopter was found in the fields after a search operation was carried out in the area by the jawans along with the police.

Senior BSF officials reached the spot and initiated a probe. Though nothing was found from near the spot, BSF authorities suspect that some contraband or arms could have been smuggled via drone. The search operation continued till evening.

According to information, the BSF jawans, during patrolling heard a buzzing sound of a drone coming from the Pakistan side. They fired illumination bombs, besides firing in the direction from where the buzzing sound was coming. The drone was hit by a bullet and it fell on the ground.

The entire area was cordoned off and a search operation was launched in presence of senior BSF officers in the morning. During the search, the police found the damaged drone and no contraband or arms were located from the spot.

Pakistan-based anti-national forces, including cross border smugglers, were involved in smuggling of contraband and arms with the help of drones. The BSF had shot a number of drones since January this year near the IB.