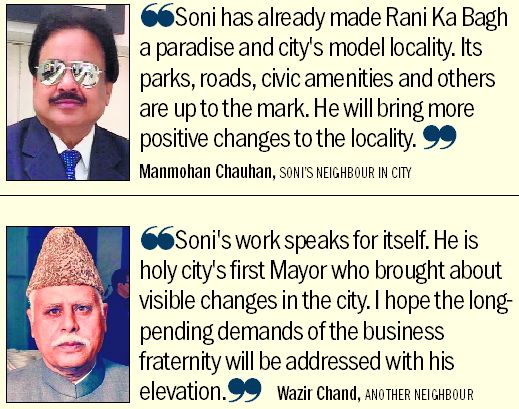 Dholis played Punjabi numbers, while his supporters danced to the beats. His nephew Vikas Soni was attending visitors coming to greet the family over the elevation of Soni’s residence in posh Rani Ka Bagh locality.

Wazir Chand, Soni’s neighbour, said: “Soni’s work speaks for itself. He is holy city’s first Mayor who brought about visible changes in the city.” He hoped that the long-pending demands of the business fraternity will be addressed with his elevation as he resolved several issues concerning the community during his four-and-a-half year rule as the Cabinet minister.

Soni has taken up various matters of the business community in the Cabinet in the past and we hope he will put in similar efforts in future as well Piara Lal Seth, president of the Punjab Pradesh Beopar Mandal

Manmohan Chauhan, another neighbour, said: “Soni has already made Rani Ka Bagh a paradise and city’s model locality. Its parks, roads, civic amenities and others are up to the mark.” He said he would bring more positive changes to the locality. “Soni is a popular leader who efficiently handled the Covid-induced lockdown and oversaw the vaccination drive,” he said.

He recalled that Soni had taken up various matters of the business community in the Cabinet in the past and hoped that he would put in similar efforts in future as well. He said the proposed meeting of the PPBM with the CM on September 21 has been cancelled with the change of guard in the state. He anticipated that Soni would re-arrange the meeting and will help in resolving all pending matters of the entrepreneurs.