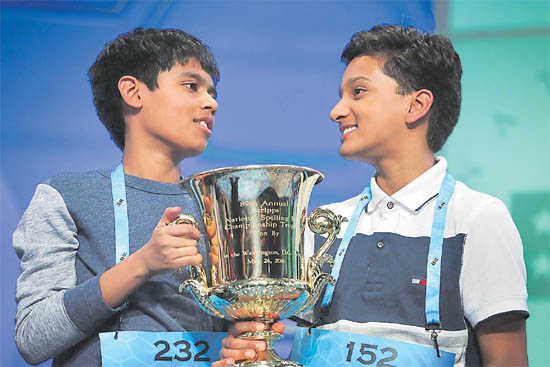 Scripting history, two Indian-American students, Nihar Janga, a fifth-grader from Austin, Texas, and Jairam Hathwar, a seventh-grader from Painted Post, New York, were named co-champions of the US Scripps National Spelling Bee on Thursday after battling 25 rounds head to head.

The late-night duel twice saw Nihar, 11, fail to capitalise on  mistakes by Jairam, 13, and claim the title outright. They ended co-winners when Jairam nailed “feldenkrais,” a method of education, and Nihar aced “gesellschaft,” a type of social relationship.

“I’m just speechless,” Jairam told mediapersons after the  contest that was televised on ESPN and repeatedly saw the audience in a hotel ballroom burst into cheers. Nihar, the youngest champion since 2002, thanked his mother adding, “I can’t say anything. I’m just in fifth grade.” Jairam and Nihar will each receive a $40,000 cash prize.

The tie is the third in a row in the Bee, a US institution since 1925. The contest had instituted a 25-round spell-off to try and avoid just such a deadlock. Nihar dazzled the audience by his grasp of words. When given “biniou,” he asked pronouncer Jacques Bailly, “Is that a Breton bagpipe?” Then whizzed through it with head down, hands at side and shifting slightly foot to foot.

Given “taoiseach,” he said, “Is that an Irish word for  prime minister?” and nailed it, bringing cheers from the crowd. Jairam created an opening for Nihar when he stumbled on “draathaar,” a king of dog, wincing when he realised his mistake. Nihar then bobbled “ayacohuite,” a Mexican tree, giving Jairam new life. “Hello again,” Jairam said to Bailly when he stepped up to the microphone. Even as the boys battled head to head, they  gave each other encouraging hand slaps as they returned from the microphone.

After several more rounds, Jairam misspelled “mischsprache,” a fused language. Nihar failed again to knock him out by missing on “tetradrahm,” a kind of coin.

One more round, and Bailly said, “This is a beautiful moment. If you both spell the next word correctly, you will be declared co-champions.” They did, and the room erupted in confetti and cheers.

Jairam and Nihar are the ninth consecutive spellers of South Asian ancestry, and the 12th in 16 years, to win the Bee. Jairam’s brother Sriram was the 2014 co-champion.

The finalists were winnowed from more than 280 spelling whizzes after two days of written and oral tests in a Washington suburb. — Agencies