CHANDIGARH:Curiously, Agriculture Department officials have been unable to trace farm machinery banks in Bathinda that were set up by the Centre under a scheme to tackle stubble. 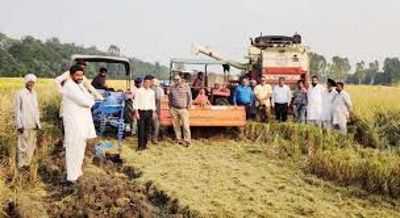 Curiously, Agriculture Department officials have been unable to trace farm machinery banks in Bathinda that were set up by the Centre under a scheme to tackle stubble. Providing 80 per cent subsidy on purchase of farm implements, these banks/centres were established by co-op societies comprising farmers, self-help groups,  farmers’ societies, farm groups and private entrepreneurs.

A team of the Central Farm Machinery Training & Testing Institute Budni, MP, that carried out a survey of 107 centres in Bathinda, Barnala and Sangrur districts in July, in a report to the Punjab Government, has said that only 73 of these could be verified and 34, all in Bathinda, were not found on the stated address. Each bank was given Rs 6 lakh-Rs 8 lakh as subsidy.

The report also said no display/information board was placed outside these centres to beckon farmers. This indicates that the machines purchased on government subsidy were not rented out to marginal/small farmers as envisaged under the scheme.

The report says 320 machines were supplied to the banks in these three districts of which only 276 were “physically available.” Seventeen machines were not used at all. A total 167 Happy Seeders  were supplied to these banks of which 24 were “not physically available” and two Happy Seeders were lying idle. Indicating under-utilisation of the machinery, the report points out that while the average area covered by one Happy Seeder in a season is 68 acres, the total area under paddy in these three districts is over 9,500 acres. The average use of other machines, such as mulcher, too was poor.

Also, office-bearers of these banks were not trained in operating these machines. No custom hiring centre has maintained a record on hiring, repairs and maintenance.  KS Pannu, Secretary, Agriculture, Punjab, claimed  there were some discrepancies in the list with the Central team. “We later provided them the correct list in Bathinda district and addressed other issues too.”