For Saudi Arabia, thanks but no tanks

IF there is a name Prime Minister Nawaz Sharif has heard once too often, it is that of Bruce Riedel. 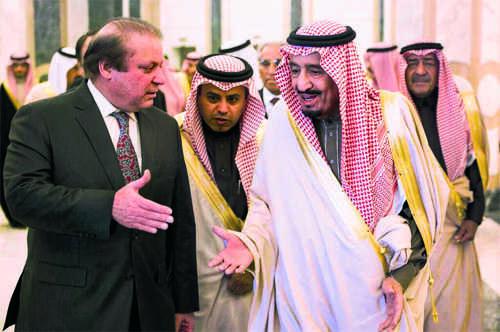 IF there is a name Prime Minister Nawaz Sharif has heard once too often, it is that of Bruce Riedel. Riedel retired from the CIA in 2006. His wife still works there. (The CIA like subcontinental politics and the US presidency is a family business.) In July 1999, when Nawaz Sharif made his lightning visit to Washington to invoke Bill Clinton's intervention after the Kargil fiasco, the only other person allowed in the meeting at Blair House, was a note-taker — Bruce Riedel. Within three months, Nawaz Sharif heard the name again. Bruce Riedel helped broker Nawaz Sharif's escape from Attock Fort. “After Sharif's ouster in a coup by Pervez Musharraf in 1999,” Riedel recalled, “he went into exile to Saudi Arabia, an agreement negotiated by myself for the Clinton administration to forestall Nawaz's execution. The deal was arranged with the influence of Saudi ambassador to the US, Prince Bandar bin Sultan.”

In 2011, Riedel (now a senior fellow at the Brookings Institution, Washington) revealed Saudi interest in Pakistan's nuclear programme. Riedel wrote: “In October 2003, then Crown Prince Abdullah visited Pakistan for a state visit. Several experts reported after the trip that a secret agreement was concluded that would ensure Pakistan would provide Saudi Arabia with nuclear technology and a bomb if Saudi Arabia felt threatened by a third party nuclear programme in the future. Both countries, of course, denied the stories.”

Riedel was, in fact, repeating the disclosure made earlier in The Washington Times by Arnaud de Borchgrave. Relying on a ranking Pakistani insider “whose information has proven reliable for more than a decade", Borchgrave spilled the radioactive beans that “Pakistan and Saudi Arabia have concluded a secret agreement on ‘nuclear cooperation’ that will provide the Saudis with nuclear-weapons technology in exchange for cheap oil. The disclosure came at the end of a 26-hour state visit to Islamabad last weekend by Crown Prince Abdullah bin Abdulaziz, Saudi Arabia's de facto ruler, who flew across the Arabian Sea with an entourage of 200, including Foreign Minister Prince Saud Al Faisal and several cabinet ministers. It will be vehemently denied by both countries … but future events will confirm that Pakistan has agreed to provide (Saudi Arabia) with the wherewithal for a nuclear deterrent.”

In November 2013, the BBC carried a report that “Amos Yadlin, a former head of Israeli military intelligence, told a conference in Sweden that if Iran got the bomb,” the Saudis will not wait one month. They had already paid for the bomb. They will go to Pakistan and bring what they need.” Our foreign ministry dismissed the BBC report as “speculative, mischievous and baseless”, insisting that Pakistan is “a responsible nuclear state”.

These revelations — deliberate and disclosed with a purpose — were timed to apply a pincer pressure by Saudi Arabia and by Israel on the US during its negotiations on a nuclear deal with Iran.

Israel and Imperial Iran had once been friends; Royal Saudi Arabia and Israel once enemies. “Any country can choose its friends,” Gholamreza Ansari the Iranian ambassador to New Delhi advised his hosts in a newspaper interview recently. “But we should not let our friends chose our enemies. If Israel is your friend, don't let them choose your enemies.” Ansari then paid an unexpected compliment to Pakistan for its stance in the Saudi-Yemeni conflict: “The Pakistanis didn't help them because they were wise.”

Our wisdom will be tested soon enough, as soon as the new Saudi administration flexes its well-oiled muscles. Interestingly, the recent dynastic mutation in Riyadh is a replay of one in Amman in 1999 (a fateful year for many), when King Hussein's brother Hassan (crown prince for 34 years) found himself peremptorily replaced by the dying Hussein’s son (now King Abdullah).

The outgoing Foreign Minister Saud Al Faisal, like his father King Faisal, had been a staunch friend of Pakistan. His successor is from a more brittle mould. Nawaz Sharif's visit of contrition notwithstanding, the Saudis are unlikely to forgive Sharif, his parliament or his country for what the Saudis regard as an unconscionable betrayal. In their eyes, we have committed the unpardonable. We have made them lose face publicly, and when all that is visible of a Bedouin Arab is his face, to lose that is to lose all.

The writer is an art historian and an author.

By arrangement with the Dawn