India stood its ground on Doklam, something expansionist China was not prepared for. The ‘for now’ thaw is just that — momentary. 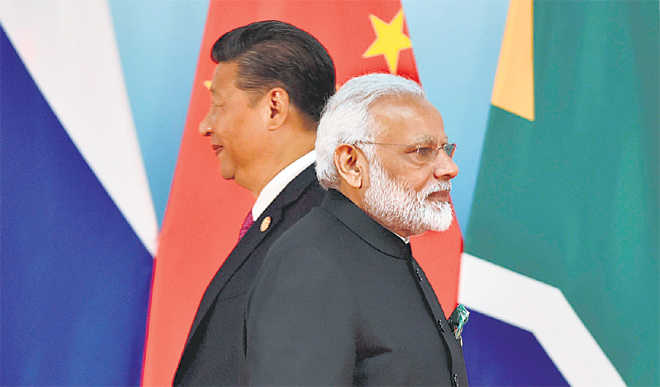 The BRICS Summit and the bilateral meeting between Prime Minister Narendra Modi and China’s President Xi Jinping amount to a wary peace, not a burying of the hatchet. Beijing’s compulsions in ending the standoff at Doklam were clear enough: the future of BRICS and the all-important Communist Party Congress next month to carve out Mr Xi’s leadership role for the next five years.

Despite the soothing words used by India’s spokesmen of looking forward, not back, the demarcation of the border remains contested and although efforts are being made to improve communications between the two sides, the problem is Chinese ambition, rather than the mechanism for dialogue.

As China seeks to assert its power in Asia in particular and in the rest of the world, it is angry with India for giving a thumbs down to its landmark ambitious OBOR project linking Asia to Europe and the rest of the world. New Delhi’s objections are primarily grounded in the economic corridor in Pakistan passing through contested Kashmir, although there are geopolitical reasons for not giving Beijing a free pass.

The Indian resistance to the Chinese road-building programme on territory claimed by Bhutan seemed to have surprised Beijing leading to a long standoff with armies facing each other. The Chinese leadership apparently believed that its usual bullying tactics combined with bluster would make New Delhi bend. With the stalemate continuing, Beijing descended to ordering its media outlets to fling abuses tinged with racism at India.

With the BRICS Summit hosted by China inching closer and Indian Prime Minister’s participation in doubt, it changed gears abruptly and took the route of negotiation to arrive at an acceptable truce. This is one advantage Beijing has with its controlled media and one-party rule; overnight they were singing a different tune.

What of the future? One can draw a number of lessons from the Doklam standoff and how it has been resolved. The Chinese method of changing facts on the ground is to employ the incremental approach, as we have seen in its success in militarising the South China Sea one outcrop at a time until it cumulatively arrives at a dominant position in a contested area.

A second Chinese tactic is to throw its weight in money power and military acquisitions to bully adversaries. Rulers in Southeast Asia and India’s neighbours are well acquainted with these methods, and with an unpredictable President in power in the US, most have little option but to give in; Southeast Asian countries with claims to the South China Sea remaining largely silent. The US, after all, is the balancer of Chinese power in Asia since the latter’s rise in the post-World War II era.

Mr Xi has two ambitious projects on his hands. He likes to compare himself to the reformer Deng Xiao-ping and beyond him to Mao Tse-tung himself as the game changer for his country. Under the guise of his anti-corruption campaign, he has taken a bevy of possible challengers out of the way. His major task is now to get his loyalists on to the politburo and especially its standing committee for the next five years to buttress his position. There are rumours of his wanting to extend his rule beyond the traditional two five-year terms.

Mr Xi has gambled a lot on his OBOR project. More than the compelling domestic reasons for using excess manufacturing capacity, it is the grandiose concept of the project that is eye-catching. Although Mr Xi underplays its geopolitical significance for China, his ambition is to seize the space left by “America First” President Trump to reorder 21st century political space.

Thus India’s no-show at the inauguration of OBOR rankles Mr Xi because India is a country of consequence in Asia, if not the world, and although Beijing has been trying to bypass it by tempting subcontinental neighbours in addition to Indian adversary Pakistan, it is a second best option. Besides, some neighbours are now realising that the generous loans granted by Beijing are coming to haunt them because Beijing virtually owns the projects it funded by the host countries’ inability to repay loans.

Both China and its beneficiaries are feeling their way to discovering how best to address the problems they increasingly face with resentment of the injection of Chinese work force and this new variety of bondage to Beijing on the strength of the money they owe it.

In geopolitical terms, Mr Xi has a more immediate problem on his hands in the shape of the world crisis over North Korea. China, as everyone knows, can bring the North to a halt by stopping trade, but fears a regime collapse leading to a flood of refugees and possible reunification of the two Koreas on US terms. Yet the young North Korean leader, Mr Kim Jong-un, has proved resistant to Beijing’s pleas and insulted his chief benefactor yet again by exploding a nuclear device just as Mr Xi was inaugurating the summit.

It does not help that the sole superpower is led by a President who makes threats of sound and fury through tweets which prove to be hot air because of the complexities of taking action, with South Korea a sitting duck for the North’s retaliation. As with former President Barack Obama and his red line in Syria he failed to act upon, Mr Trump has lost face as Mr Kim ups the ante each time.

China’s hands therefore are full at the moment with setting the domestic agenda, furthering the OBOR grand plan and coping with a truant client and an unpredictable US President. The Doklam standoff therefore came at the wrong time, with New Delhi  refusing to stand down.

India will, of course, keep a watchful eye on Chinese activities along the long border. All indications suggest that Beijing is far from coming to the conclusion that it is time to demarcate the border by agreement. For the present Mr Xi is busy with his other preoccupations.