CHANDIGARH: Gifted a BMW by his parents instead of a Jaguar that he was demanding, a youth from Yamunanagar pushed his new car into a swollen river in a fit of anger, police said. 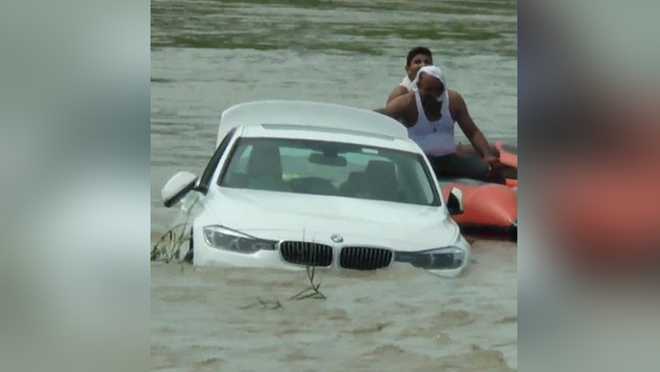 Gifted a BMW by his parents instead of a Jaguar that he was demanding, a youth from Haryana's Yamunanagar on Friday pushed his new car into a swollen river in a fit of anger, police said.

The father of the youth is said to be a landlord in a village in Haryana.

The drowned car was a BMW 3-Series or 5-Series, which means that it would have cost the landlord not less than Rs 35 lakh.

The video shows the car later got stuck in the middle of the river on a large patch of grass.

The youth, later with the help of local divers, tried to get the car out of the river.

Police have registered a case.

With Inputs from IANS.

#Watch: A youth from Haryana's Yamunanagar on Friday pushed his new car into a river in a fit of anger because he did not like the gift he received from his parents. His gift was a BMW. pic.twitter.com/6iasmzikZd