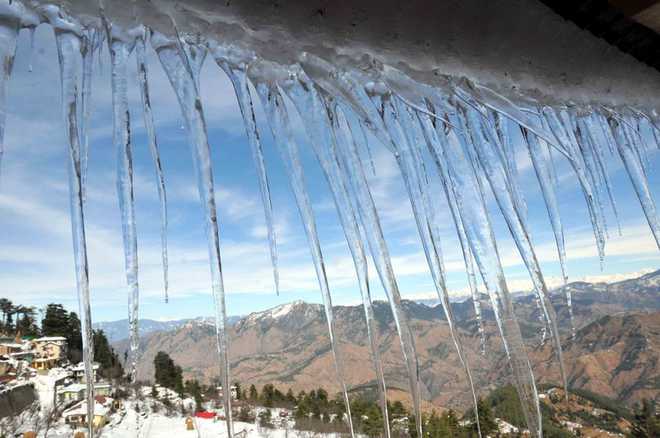 Icicles hang from the roof of a building after heavy snowfall at Kufri near Shimla on Thursday. Photo: Amit Kanwar

Biting cold wave conditions persisted in most parts of Himachal as minimum temperatures stayed close to freezing point. The state capital Shimla and Solan experienced coldest night of the season with mercury slipping to -0.5°C.

As many as 82 roads in Shimla, Mandi, Kinnaur and Kullu districts, including the Hindustan-Tibet National Highway, were blocked due to snow. Traffic to Rampur and Rekong Peo was being diverted via Basantpur and Kingal.

Road clearance work was on progress and most of the roads would be opened by tomorrow evening, Ajay Garg, Superintending Engineer (PWD) said. As many as 22 roads were closed in Kinnaur, 17 each in Kullu and Mandi and 26 in Rohroo, Chopal and Rampur areas of Shimla. Thick ground frost occurred in mid and higher hills and water pipes froze at many places in Shimla and other towns. Slippery roads hampered vehicular traffic in the morning hours but normal traffic was restored in mid hills by the noon.

The Shimla-Rohroo and the Shimla-Chopal roads were blocked due to heavy snow at Khara-Patthar. Tribal Lahual and Pangi Valleys were cut off from the rest of the state due to closure of Rohtang Pass. Bharmaur recorded 15 cm of snow during the past 24 hours while Bijahi recorded 12 cm of snow followed by Kalpa (8 cm), Mashobra and Khadrala (7 cm), Shimla (5 cm), Keylong (4 cm) and Manali (3 cm).

However, the maximum temperatures increased by few notches and Una was the warmest during the day with a high of 20.8°C, followed by Nahan 18.8°C, Solan 17.4°C, Dharamshala 14.2°C, Shimla 12°C, Manali 6°C and Kalpa 5.8 °C. The mid and lower hills experienced widespread rains during the past 24 years. Dharamshala was the wettest place in the region with 24 mm rain followed by Dehra Gopipur 23 mm, Kumarsain and Jogindernagar 20 mm, Gohar 19 mm, Sundernagar and Jubbal 18 mm, Hamirpur 17mm, Baijnath and Gaggal 16 mm and Kotkhai and Sujanpur Tira 15 mm.

The local MeT office has predicted dry weather in the region over next four days and light rains or snow at isolated places from January 20 next.

The sky was clear since morning and the day remained sunny. The Delhi– Kangra flight of the Spice Jet was cancelled yesterday due to bad weather was resumed today, said KK Sharma, Director Kangra Airport. He said the Air India flights had been withdrawn till January 19.

The valley was left out of gear following continuous rains for more than twenty hours yesterday and snowfall at Naddi, Bagsu Nag and Dal Lake besides on the sparkling Dhauldhar mountain ranges had dropped the temperature leaving the valley shivering. The majestic Dhauladhar ranges wore a white mantle following yesterday’s snowfall.