DHARAMSALA:A massive landslide damaged eight houses at Kand village, about 20 km from Dharamsala, on Wednesday night. The villagers have been given shelter at the Mahila Mandal Bhawan and the village community hall. 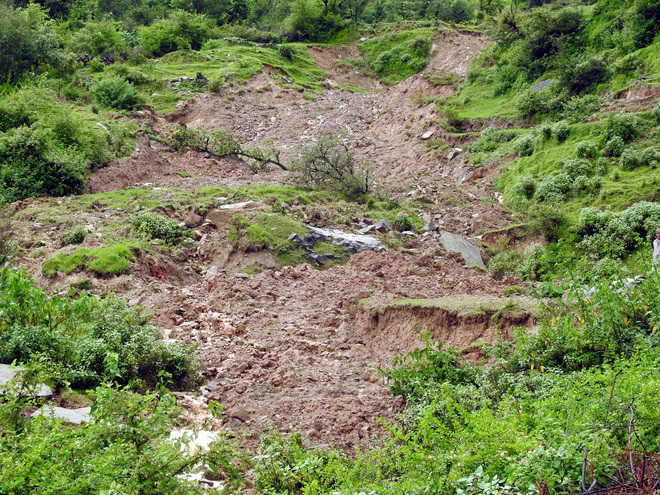 A landslide at Kand village near Dharamsala. photo: Kamaljeet

A massive landslide damaged eight houses at Kand village, about 20 km from Dharamsala, on Wednesday night. The villagers have been given shelter at the Mahila Mandal Bhawan and the village community hall.

The landslide has brought down a significant portion of the hill and washed away a road and retaining walls along it. The district administration has provided food to the affected villagers.

Sunil Kumar, whose house had been damaged, said since the entire top crust of the hill in their area had slid down, their houses had developed big cracks.

“The landslide occurred on Wednesday after heavy rain in the region,” he added. Chandan Singh, another villager, said the village had never witnessed such a landslide earlier. “About 2 hectares of fertile land has been affected by it. We have urged the district administration to provide us alternative land and financial aid for the construction of new houses,” he said.

However, the landslide-hit region was part of the area that has been proposed for the construction of Central University Himachal Pradesh (CUHP) campus.