NEW DELHI: In a visit aimed to further build on the strong Indo-Dutch strategic partnership, King Willem-Alexander and Queen Maxima of The Netherlands began their five-day state visit to India. 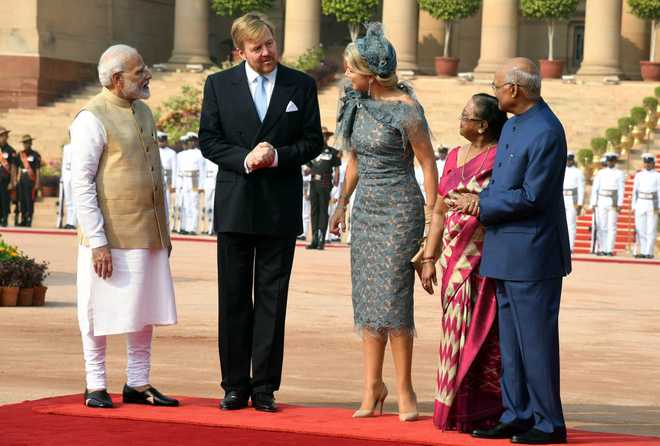 In a visit aimed to further build on the strong Indo-Dutch strategic partnership, King Willem-Alexander and Queen Maxima of The Netherlands began their five-day state visit to India that will focus on areas such as water technology and maritime development, healthcare, sustainable agriculture, social initiatives and cultural heritage.

The Dutch royals, who arrived here on Sunday night, received a traditional welcome at the airport.

"A traditional welcome to our special guests. Their Majesties King Willem-Alexander and Queen Maxima. @koninklijkhuis Aarrived for their first State visit to India. Their packed programme in India is intended to further build upon the strong Indo-Dutch strategic partnership," tweeted MEA spokesperson Raveesh Kumar.

Their trip is on the invitation of President Ram Nath Kovind. The royals will also visit Mumbai and Kochi in Kerala.

On Monday, the royals received a ceremonial reception at the Rashtrapati Bhavan, after which they went to Raj Ghat to lay the wreath at the 'samadhi' of Mahatma Gandhi. External Affairs Minster S. Jaishankar called on them at The Oberoi.

"Building upon the strategic trust. EAM @DrSJaishankar Acalled upon HM King Willem-Alexander and HM Queen Maxima @koninklijkhuis of the Netherlands and had fruitful discussions on expanding our relationship," tweeted Kumar on the meeting between Jaishankar and the royals.

"Special guests welcomed by @rashtrapatibhvn in its special way. #PresidentKovind and PM @narendramodi extended a ceremonial welcome to HM Willem-Alexander and HM Queen Maxima @koninklijkhuis. Centuries old Indo-Dutch ties have been nurtured through engagements at highest level," he tweeted on the ceremonial welcome." They will hold a meeting with Prime Minister Narendra Modi at Hyderabad House. At night, they will call on President Kovind, who will host them for a banquet.—IANS