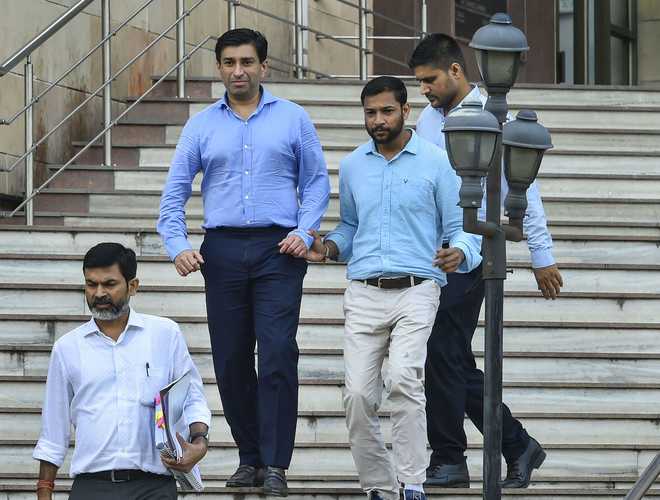 The CBI had booked Puri and others in connection with the bank fraud case, officials said on Sunday.

The CBI on Sunday had also carried out searches at six locations, including the residences and offices of the accused directors.

Ratul had resigned from the post of Executive Director in 2012, while his parents continued to be on the board, the bank had said in a statement.

The company is involved in the manufacture of optical storage media like compact discs, DVDs, solid state storage devices.

The company was taking loans from various banks since 2009 and went for debt restructuring a number of times, the bank alleged in the complaint which is now part of the CBI FIR.

Enforcement Directorate, the agency that is also investigating chopper scam, told the court that his custody was necessary for "an effective investigation".

Justice Sunil Gaur said that Puri was evasive in his replies during questioning by the probe agency, ED, and it was evident from witness statements provided to the court that he was trying to influence them.

It also said that mere attachment of his property in income tax proceedings would not justify grant of pre-arrest bail to him.

Puri had challenged the August 6 order of the trial court dismissing his anticipatory bail plea.

On August 9, the trial court issued a non-bailable warrant against Puri on ED's plea.

Puri faces allegations of if being involved in the now scrapped Rs 3,600 crore AgustaWestland chopper deal.

The case pertains to alleged irregularities in the purchase of 12 VVIP choppers from Italy-based Finmeccanica's British subsidiary AgustaWestland. The deal was scrapped by the NDA government in 2014 over the alleged breach of contractual obligations and charges of payment of kickbacks for securing the deal.

According to the ED, Puri's role surfaced after deportation of another AgustaWestland case accused Rajeev Saxena on January 31 from the UAE and the arrest of Sushen Mohan Gupta, an alleged defence agent.

Saxena has turned approver in the court and is out on bail.

It said the investigation showed Puri's foreign entities received proceeds of crime directly from Interstellar Technologies Limited, an accused company, and he had received funds from both the chains of money laundering involved in the matter.

It said the probe has further revealed that Puri, using shell companies in the name of others, accumulated proceeds of crime which have been parked and later laundered to reach the desired beneficiaries including him.

The agency claimed that Puri has also received proceeds of crime from channel of another alleged middleman Christian Michel James. PTI