Nirmala may visit US, first after Indo-Russia S-400 deal

NEW DELHI: Two months after India ignored US sanctions to announce the S-400 “Triumf” air-defence missile deal from Russia, Defence Minister Nirmala Sitharaman is expected to visit the US in December, making it the first high-level visit since then. 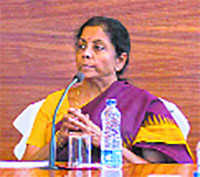 Two months after India ignored US sanctions to announce the S-400 “Triumf” air-defence missile deal from Russia, Defence Minister Nirmala Sitharaman is expected to visit the US in December, making it the first high-level visit since then.

Sources confirmed to The Tribune that the Defence Minister is slated to travel to the US. Progress of the Indo-US military relations will be reviewed during the visit.

India has a strategic partnership with the US but has made it clear to Washington that India-Russia military relations stand separate from the India-US ties and that these are not inter-connected. On October 5, India-Russia announced the deal after the Narendra Modi-Vladimir Putin meeting in New Delhi, saying: “Both sides welcomed the conclusion of the contract for the supply of the S-400 long-range surface-to-air missile system to India.”

On October 10, US President Donald Trump during an interaction with journalists at the White House had said India would find out what action the US took against it for defence deal with Russia “sooner than you think”.

“India is going to find out, aren’t they,” Trump said while responding to a question about India-Russia S-400 deal. Trump’s comments were in contrast to previous remarks by US Secretary of State Mike Pompeo and Defence Secretary James Mattis. Both argued for a waiver to India and not impose sanctions. Mattis had testified before a Congress committee favouring a waiver as the US views India as a key ally.

Ironically, in September, India and the US signed an agreement on exchange of military information — Communications, Compatibility and Security Agreement.

The US, in June, passed the Countering America’s Adversaries through Sanctions Act that requires imposing curbs on nations that have “significant” defence relations with Russia. There is a provision for a waiver and New Delhi has argued out its case to the US. “The waiver authority is not a blanket waiver. Waivers are considered on transaction basis. We cannot prejudge any sanctions decisions,” the US had said after the deal.