SONBHADRA: Congress general secretary Priyanka Gandhi Vadra on Tuesday visited the Sonbhadra village where 10 tribals were shot dead over a land dispute, nearly a month after the UP administration prevented her from going to the site of the massacre by detaining her in Mirzapur. 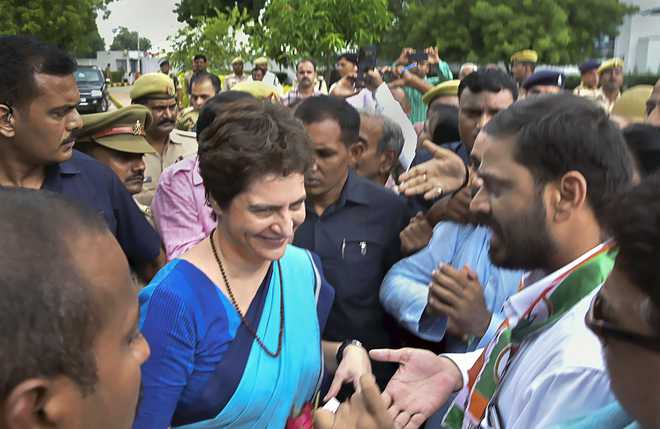 Congress general secretary Priyanka Gandhi Vadra being welcomed by party cadres on her arrival at the airport in Varanasi on Tuesday. PTI photo

Congress general secretary Priyanka Gandhi Vadra on Tuesday visited the Sonbhadra village where 10 tribals were shot dead over a land dispute, nearly a month after the UP administration prevented her from going to the site of the massacre by detaining her in Mirzapur.

Priyanka Gandhi covered the distance from Varanasi to Umbha village in Sonbhadra district, about 100 kilometres apart, by road, prompting Uttar Pradesh Deputy Chief Minister Dinesh Sharma to say she was pulling off a "political stunt".

Shortly after arriving at the Varanasi airport this morning, she tweeted, "Today, I am going to Sonbhadra to meet the brothers-sisters and children of Umbha village, enquire about their well-being and to be part of their struggle". "I had promised the members of affected families of Umbha village, who had come to meet me at Chunar Fort, that I will visit them," she said.

Later, the UP Congress tweeted photographs of her reaching the village, where armed men led by a former village pradhan had gunned down 10 Gond tribals when they resisted an attempt to take control of the disputed land on July 17.

Congress leaders said she will talk to the villagers and get a first-hand account of the steps taken by the state government for their security in the aftermath of the shooting.

"The root cause of the Sonbhadra incident can be traced to the Congress. She should go there to repent (paschataap) the act of former Congress leaders. After so many days, when action has already been initiated into the incident, this is only a political stunt," Sharma said.

On July 21, four days after the shooting incident, Chief Minister Adityanath had visited the area and he too had pinned the blame on the previous Congress dispensations for the land dispute, suggesting that it had been lingering on since 1952.

Two days before the chief minister's visit, she had tried to visit the village to meet the families of those affected by the shooting.

On way to the adjoining district, authorities stopped her in Mirzapur from proceeding further as section 144 of the CrPC was imposed in the village then due to tension in the area.

Her detention at the Chunar Fort triggered a standoff between her the state government.

She spent the night at the fort and met the members of the tribal community the next day. Before being detained, she had met at a Varanasi hospital the families of those injured.

Opposition parties had dubbed her detention as "undemocratic and unconstitutional".

Priyanka Gandhi had then said took a jibe at the chief minister over his visit, saying "acknowledging one's duty is good". PTI