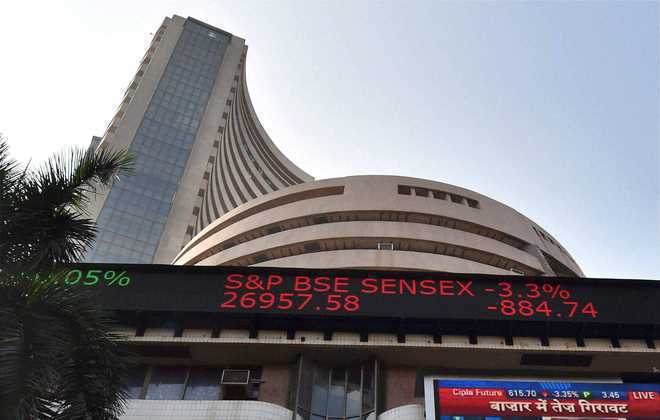 Shares of Reliance Industries (RIL), however, capped the losses on the index by rallying over 8 per cent.

Financial markets were closed on Monday on account of Bakri Id.

On the other hand, RIL rallied to become the biggest gainer, after Mukesh Ambani on Monday announced plans to sell stakes in the firm's oil and chemicals business to Saudi oil giant Aramco and in fuel retail network to BP plc for Rs 1.15 lakh crore, and said its telecom unit Jio will begin offering fibre-based broadband services from next month.

Tata Motors, Tata Steel, Sun Pharma, ONGC, Yes Bank, Hero MotoCorp and Asian Paints were the other gainers, rising up to 2 per cent.

On the other hand, bourses on Wall Street ended lower on Monday.

The rupee, meanwhile, depreciated 30 paise against its previous close to trade at 71.08 in early session.

Brent crude futures, the global oil benchmark, slipped 0.15 per cent to trade at 58.49 per barrel. —PTI