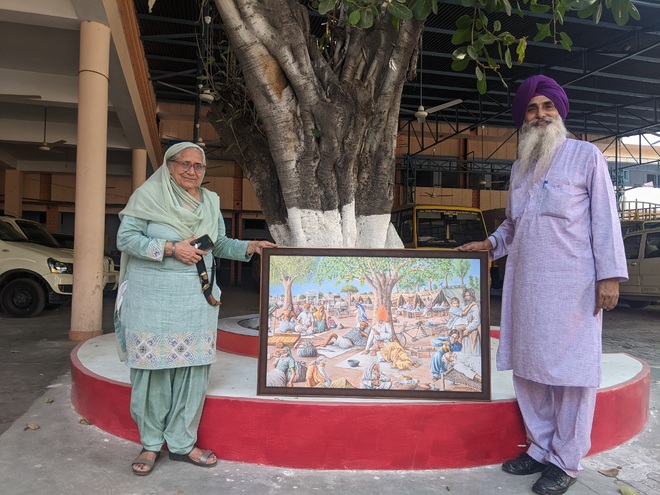 Sukhpreet has tried to cover struggles and services of Bhagat Puran Singh.

Renowned artist Sukhpreet Singh, who has portrayed life of Bhagat Puran Singh in his painting, was in the city to present the painting to Dr Inderjit Kaur, patron-president of the Pingalwara Charitable Society, here on Friday. It is first such painting in which an artist has covered all the events and achievements of the esteemed personality.

Explaining the piece, Sukhpreet stated that he has tried to cover struggles and services of Bhagat on this three ft canvas with acrylic colours. “Several pictures were available to narrate his life. I took the real life expressions. The Banyan tree is in main focus, where Bhagat would sit inside the Pingalwara. His affection with Payra Singh, who found him abandoned before partition of Punjab. I have depicted him while serving the patients, running wooden cycle ambulance and serving langar,” he added.

Sharing his personal experience, he said, “I have been greatly influenced by him. When I was a teenager, Bhagat Puran Singh came to preach at a gurdwara in Ludhiana. After his speech, followers filled his battta (an iron bowl) with banknotes. Meanwhile, as everyone sat down for langar I was lucky to get seated near him. Suddenly, a dust storm came and hit his donation bowl. The money was scattered all over the place. I picked a few notes for him.” What happened next really surprised him. “He simply responded: don’t worry, they have gone back to the donors.’ After 35 years, I have painted the same bowl and gave considerable space to it.”

Inderjit Kaur appreciated the art work and shared many stories of Bhagat Puran Singh. “We will display the painting at an appropriate place in the Pingalwara’s museum”, she said.