Ukiyo-e style broke away from the rigid classicism of earlier Japanese works, inspiring the greatest of artists, not just in Japan, but the world over 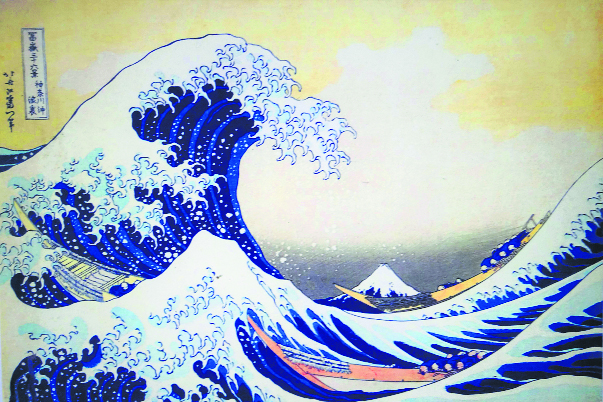 “….living only for the moment, savouring the moon, the snow, the cherry blossoms, and the maple leaves, singing songs, drinking sake, and diverting oneself just in floating, unconcerned by the prospect of imminent poverty, buoyant and carefree, like a gourd carried along with the river current: this is what we call ukiyo.”

‘When I was 50 I had published a universe of designs, but all I have done before the age of 70 is not anything of great value. At 75, I’ll have learned something of the pattern of nature, of animals, of plants, of trees, birds, fish and insects. When I am 80, you will see real progress. At 90, I shall have cut my way deeply into the mystery of life itself. At 100 I shall be a marvellous artist. At 110, everything I create — a dot, a line — will jump to life as never before.’

A little short of 300 years ago, there emerged in Japan an art movement that changed the world of art nearly all over the world. Ukiyo-e, meaning, literally, ‘Pictures of the Floating World’, is what this movement aimed at producing, moving away from the rigid classicism of earlier Japanese works and submerging itself in the ordinary, hedonistic world of the common man in which Kabuki actors and seductive courtesans, tea-houses and entertainment parlours, wrestling heroes and famous romantic vistas, all moved about raucously. The word ukiyo, which came to be associated with the movement, had originally expressed the Buddhist idea of the transitory nature of life. But suddenly this rather sober, even pessimistic, notion was overturned. From meaning ‘transitory’, which life of course is, the emphasis shifted to ‘floating’, expressing an attitude of joie de vivre. This new visual world, created by some remarkably gifted artists, was brought into being in the form of woodblock prints, which made it possible for anyone with a bit of extra cash to move into a world of dazzling images. The movement took off like a blazing fire, and names of artists — like Hokusai, Hiroshige, Utamaro, Sharaku, among them — started becoming household names, even as their inexpensive woodblocks hung about, grew into posters, turned greeting cards, or wrapping paper, peppering home after home and street corner after street corner.

I have written about ukiyo-e before, in this very column. The subject is seductive and what it leads to — in terms of exploring its complexities and measuring its impact on the world of art alone — can keep one occupied for a long, long time. It is possible to take just one artist alone and his work — the great Hokusai for instance: 30,000 works; obsessive concerns with single themes like Thirty Six Views of Mt. Fuji, and another 100 that followed; Remarkable Views of Bridges in Various Provinces; a single extraordinary work 180 meters in length; constant self-examination — and find it hard to emerge from it. It is equally possible at the same time to go across to Europe from Japan and see how electrifying and profound the impact produced by ukiyo-e prints was on artists who were to become icons of modern art in their own right — Monet, Degas, Renoir, Toulouse-Lautrec, among others — admiring these new flat colours, shadow-less surfaces, and dramatic angles, that were coming in from Japan. Volumes have been written, and the theme is not exhausted yet.

On another note, however. Against this background, I find myself asking whether in some strange, time-bending, way, we — all of us — are not part of a ‘Floating World’ too. Not floating, as Asai Ryoi described, merrily “like a gourd carried along with the river current”, nor like logs cut fresh from a forest and rushing downstream: now moving, now stuck briefly in some corner. But drifting; unaware of where we are headed. Or — even worse — aware but unable to do anything about it. Consider the world we are living in at any level: political, economic, social, cultural, above all, moral. It is sheer mayhem. There is no merriment in it, no celebratory noises do we hear except those bellowed out by mindless media or cash-rich corporations, in the name of entertainment. A virus rises and spreads from some unknown source, or lab perhaps, and begins to squeeze the world, holding it from its scrawny neck. A black man is choked to death by a white policeman in uniform, nation-wide protests and riots break out, and yet nothing, nothing truly, happens. Millions of migrant labourers/workers begin to trudge homewards, all possession, all jobs, all dignity, lost, and continue to hope for better days to come. In another corner of the world, men opposed to the establishment are administered slow doses of poison so as to neutralise them. A known terrorist organisation threatened to set the world on fire if its demands were not to be met and yet, despite all the efforts of the wide range of nations, it keeps expanding and ‘burning’. We are moved, but remain unable to move.

Intriguingly, or as a diversion perhaps, I look at some of the ukiyo-e images — mostly Hokusai — from time to time, and see in them things that tell us something or the other about our world of today, or about our mindsets. In the Great Wave off Kanagawa by Hokusai, “arguably the single most famous image in all Asian Art”, are caught some hapless little boats. We do not even see them at first, for so overpowering is the ‘noise’ we hear made by the roaring wave, drowning all other sounds and sights, but slowly we begin to see them: not one, but three, all but about to be submerged and swept. In The Suspension Bridge on the Border of Hida, where two figures are seen, precariously positioned with everything shaking and heaving under them while they take their rickety steps, we can almost see ourselves. When mindless young men fly a kite from a sharply sloping slate roof — Kite Flying from Rooftop — we nearly tumble ourselves. In Torii Kiyomitsu’s Acrobats, just about everything points to nothing else than showmanship, performance.

It is but rarely that we come upon a calming sight like A Boy Watching Mt. Fuji. The rest of it — if not in ukiyo-e, at least in our own lives and our ‘floating’ surroundings — is a world that is all leak and creek, pitch and roll, keel and tilt. Isn’t it?