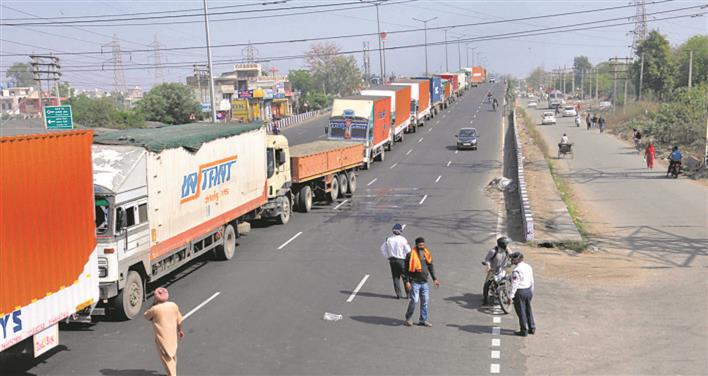 The 12-hour Bharat bandh call received a good response in Moga and its adjoining districts. While markets, private establishments and industries remained closed, the road and rail traffic across the Malwa belt was adversely hit.

Farmers, farm labourers, commission agents, trade unions and activists of political parties squatted on railway lines, and national and state highways. There was no report of any untoward incident from anywhere in the region. The emergency services were exempt from the blockade.

Arhtiyas, traders come out in support

The overall bandh was peaceful and no untoward incident was reported in the district.

In Bathinda and Mansa districts, roads and markets, both in city and rural areas, wore a deserted look. Buses of PRTC as well private operators did not ply, while hospitals witnessed up to 70 per cent fall in patient inflow in OPDs. Members of different trade unions and arhtiya associations also joined farmers in the protest and raised slogans against the three farm laws.

In Bathinda city, almost all markets remained closed during the day. Only chemist shops and hospitals remained open but these too witnessed thin footfall. Protesters kept making announcements from loudspeakers mounted on vehicles to keep the shops closed. The traders’ fraternity also lent support to the bandh call. The wholesale vegetable market of Bathinda did not witness much activity as no fresh stock of vegetables or fruits arrived in the mandi and vendors participated in the bandh call. In the rural areas and different mandis (blocks) in the district such as Goniana Mandi, Sangat Mandi, Bhucho Mandi, Rampura Phul, Maur Mandi and Rama Mandi among other small markets in villages remained shut during the day. But liquor vends were operational.

All markets remained closed in both Sangrur and Barnala districts. Various farmer organisations have decided to intensify their agitation against the central farm laws in the coming days.

All markets remained closed in Ropar, Chamkaur Sahib and Morinda while trains were disrupted as farmers sat on a dharna at various places today. There was, however, no impact of the bandh in Nangal where all markets remained open throughout the day.

The farmer unions had already exempt Kiratpur Sahib and Anandpur

Sahib from the bandh call due to the ongoing Hola Mohalla festival.

(With inputs from Sangrur, Ropar & Muktsar)