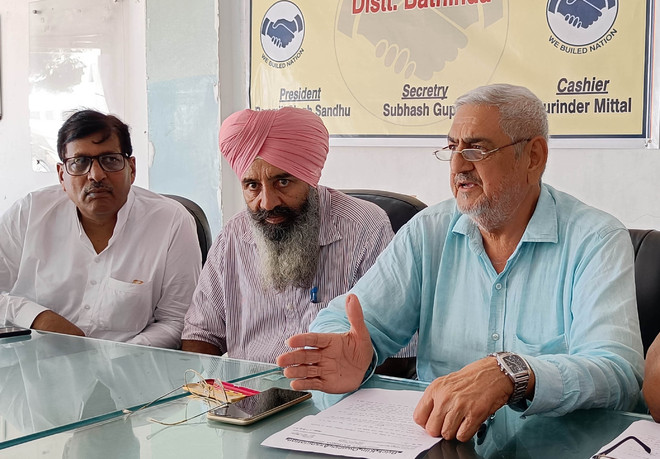 Brick kiln owners at a press meet in Bathinda on Thursday.

Citing “steep hike” in coal prices, brick manufacturers have been finding it difficult to stay afloat in the market.

At a press conference here today, owners of brick kilns rued that prices of coal had almost doubled in the past one year, which had increased the production cost of bricks, affecting their business adversely. As a result, many kiln owners had to shut operations permanently and switch to other alternative businesses in recent years.

In Bathinda, 250 brick kilns were operating until four years ago, but the number has come down to 140 now

As per Brick Kiln Owners’ Association representatives, owing to successive governments’ “utter disregard” for the industry, the number of brick kilns had reduced from 3,600 to 2,600 in the past four years and if the situation remained the same, many others would also be coerced to shut kilns.

Association president Paramjit Singh Sandhu said: “Until last year, we were purchasing coal at Rs 7,000-7,100 per tonne, excluding all taxes, freight charges and other miscellaneous expenses, but now we are buying the same quantity for Rs 17,500 and if we add GST, freight and miscellaneous expenses, it costs us around Rs 22,000 per tonne. The rates of diesel have skyrocketed, so we have accordingly been charged more for freight. In Bathinda, 250 brick kilns were operating until four years ago, but the number has come down to 140 now.” Sandhu said: “The government, in the name of curbing pollution, told us to install expensive equipment and build kilns with specific techniques. So, many had to reconstruct kilns from the scratch. Now, steep hike in coal prices has pushed us to the lowest ebb.” — TNS