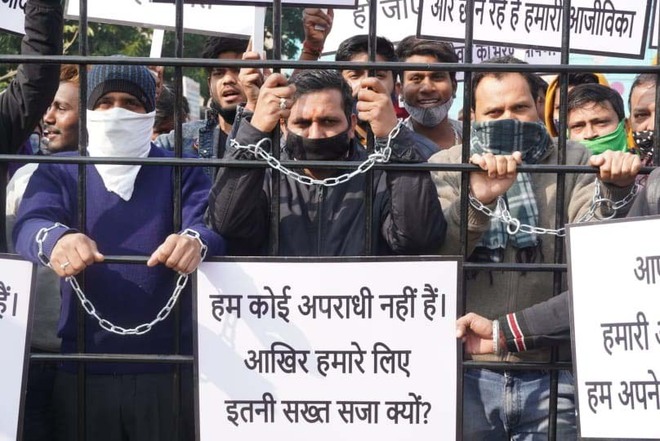 Members of the Punjab and Haryana chapter of the Federation of Retailers’ Association of India protest in Sector 3, Panchkula, on Friday.

The Punjab and Haryana chapter of the Federation of Retailers’ Association of India (FRAI) staged a protest at Sector 3 here today.

The protest was held to save the interests and livelihoods of around 6.5 lakh micro retailers and 30 lakh dependents in the state, who sell multiple products to earn a meagre sum, and prevent their harassment.

The protest was held to save the interests and livelihoods of around 6.5 lakh micro retailers and 30 lakh dependents in the state, who sell multiple products to earn a meagre sum, and prevent their harassment.

Varun Arora, a FRAI member, said, “The FRAI and its member organisations all over the country are disturbed by the undemocratic amendment to the Cigarettes and Other Tobacco Products Act (COTPA) Bill 2020 proposed by the Ministry of Health. It disallows retail sale of loose sticks of cigarettes, prohibits sale of tobacco products to persons below 21 years, and puts control on in-shop advertising and promotion amongst others. It seems the authorities aim at destroying business for smaller retailers without impacting their large counterparts.”

“We urge the PM for immediately roll back of proposed amendments as these are extremely harsh. By making age old trade practice like selling loose cigarettes a cognizable offence and an imprisonment of seven year for small violations will make small traders look like criminals,” he said.

“This amendment puts paan, bidi and cigarette sellers in the same crime list category as a person voluntarily throwing acid on someone or causing death by negligence,” he added.

“How can anybody be so insensitive while drafting the amendment towards poor and marginalised people, who struggle to make their both ends meet,” he said.

“We also demand that petty retailers’ be exempted from licensing requirement under the proposed amendment. A poor and uneducated small shopkeeper, who barely manages two square meals a day, will struggle to get a license and renew it every year,” he added.