Mercifully, the Supreme Court has awoken to the necessity of intervening on behalf of the helpless when heartless rulers ignored miseries that could have been mitigated. The migrants need their mothers, their wives, their children at critical times when emotional security is as important as food. 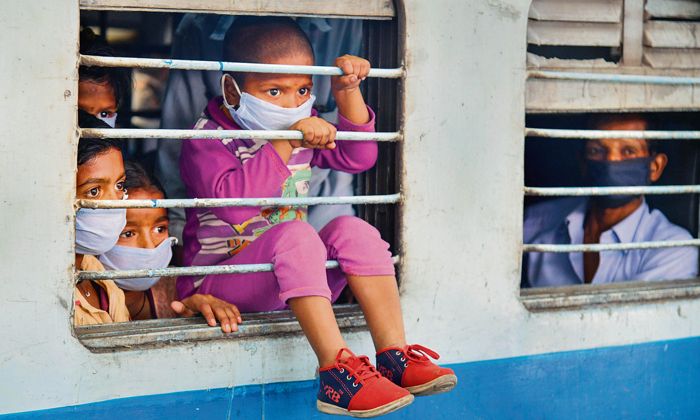 Ulterior motive: Electoral calculations have made the BJP woo them.

Realising at last that the neglect of the migrant crisis may cost it the next election, the BJP has decided to woo this important player in the nation’s economy! Rich or poor, every human being needs emotional support. It even overrides other essential needs. The spectacle of migrants trudging home on foot with their meagre belongings did not move the power-wielders! But electoral calculations did.

Mercifully, the Supreme Court has awoken to the necessity of intervening on behalf of the helpless when heartless rulers ignored miseries that could have been mitigated. It required a nudge from 20 leading legal luminaries to shake the conscience of the judges!

Modiji needs to be reminded that just as he visits his mother when he needs her blessings, the migrants need their mothers, their wives, their children at critical times when emotional security is as important as food in the stomach.

A year ago, I hired a boy named Vijay as a live-in domestic help. Live-in help was a necessity after the surgery which followed my fall in the bath. Vijay was a mason’s assistant in the building trade. He was happy to make the shift as he earned more, was better fed and better housed. His friends from his village continued to work in construction and continued to stay in a slum, spending half their earnings on food and clothing.

One would think that Vijay would not be afflicted by the itch to hurry home to wife and mother, but from the time the lockdown was extended, he thought of nothing else.

I admit that Vijay had intended to take a yearly break for a month in April. He had bought his train ticket much earlier.

At first, Vijay did not seem to be troubled by the change in his plans brought about by the coronavirus. But that changed dramatically after he spoke to his friends. It became an obsession. I could sense the great change in him. I knew I had to help him, though his absence would cause inconvenience to me. (I had to shift to my daughter’s house to ensure the safety of two old people — my wife and I).

Based on what Vijay told me, I gather that he left home when he was 15! He, along with other village boys of his age, travelled from Bihar to Sangli in Maharashtra, where a labour contractor had arranged non-technical work in a small-scale factory manufacturing parts. The boys stayed in a room provided by the owner and ran their own kitchen. They left en masse and moved to Mumbai when one of the boys was bitten by a snake. The owner of the factory got the boy treated at his expense, but the trauma was too great for the group to stomach.

In Mumbai, a labour contractor set them up as daily labourers in the building trade. Their job was to assist the masons by carrying mud and cement on their heads and handing over tools. The work was uninspiring, the living arrangements primitive and the compensation barely enough to keep body and soul together. Since the boys stayed together, the communal living substituted for familial support.

Yearly visits home were a necessity if zest for life under sub-human conditions was to be maintained. Vijay spent four months with his newly married wife, his mother, his brother and sister-in-law and their two small children. The four-month break with those he loved compensated for the loss of earnings suffered while on leave.

He came back to Mumbai because he had no alternative means of employment in his village or even in his state of Bihar. He joined his friends in the construction trade, slogging it out for a pittance.

I decided to facilitate Vijay’s departure. I found that the police had been entrusted the task of accepting applications from migrants wanting to be transported by train. The police were to prepare lists of eligible migrants (those staying in containment zones were to be excluded) and forward requisitions to the Railway office to allot a train to a specific destination as soon as 1,100 (later increased to 1,500) passengers were registered.

I ensured that Vijay was included in the list to Patna. I kept phoning the IPS officer responsible for the exercise almost every day or every second day. One train to Patna did leave, but Vijay's name was not on the manifest. The senior officer said his name would be on the next train. He received a call in the middle of the night that he should be ready with bag and baggage the next morning. But that morning never came! Trains to Bihar were diverted to UP! Why? No one knew.

After struggling for more than a month, I had to take back the hope I had given to the boy! Every day, I noticed disappointment levels rising, facial expressions changing, morale sagging! Through his despondency, Vijay kept answering his mobile calls. Then one day, he came and informed me that his friends had hired a car to transport them to their village in Bihar. The cost was more than he could afford. I gave him the money and a month’s leave salary, to see him through.

Vijay left last Saturday. He arrived in his village two days later. He and his friends are about to finish their quarantine of 14 days in the village school before they rejoin their loved ones next Sunday!

There are lessons to be learnt from his story. Vijay was one of the few lucky ones. What of the millions that set out on foot, what of them? Modiji needs to contemplate!