Over 12-kilometre of NH-44, from Bahalgarh village to Singhu border in Sonipat district, is witnessing a massive traffic jam as farmers have parked their tractors on both sides of the highway 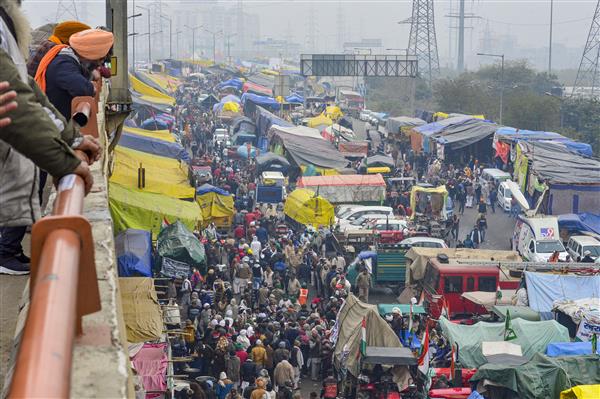 A day ahead of their tractor march, farmers from Punjab and Haryana have reached Singhu and Tikri borders in large numbers leading to huge traffic snarls on Karnal–Delhi and Rohtak–Delhi stretches of two national highways.

Over 12-kilometre of NH-44, from Bahalgarh village to Singhu border in Sonipat district, is witnessing a massive traffic jam as farmers have parked their tractors on both sides of the highway.

Tractors, bearing tricolour have created a patriotic atmosphere at Tikri.

In Karnal, enthusiastic farmers continue to march towards Delhi on tractors, leading to complete traffic chaos on the national highway-44. Several farmers are marching on foot showing their resentment against the three farm laws passed by the Union government.

On the other hand, at Bastara toll plaza, in absence of male farmers who have left for Delhi, women have taken over the charge of the protest at the toll plaza, where the farmers have been sitting on dharna since December 25 to make the toll plaza free for commuters.

In Ambala, enthusiastic farmers continue to move on the Amritsar-Delhi National Highway.

However, the frequency of tractors passing on the NH seem to have decreased on Monday morning compared with the numbers of tractors seen over the last three days.

A majority of farmers from Ambala and Kurukshetra had left for Delhi on Friday or Saturday.

Gurugram police are not allowing entry of tractors on Delhi-Jaipur expressway and are asking the farmers to stick to the designated route.

Meanwhile, Haryana police have issued a traffic advisory for people travelling to or from Delhi on Monday, Tuesday and Wednesday.

A spokesperson of the Haryana Police said that in view of the security and traffic arrangements for Republic Day and the proposed Tractor Rally, commuters will face traffic disruptions on NH between Karnal to Delhi and Rohtak to Delhi from 25-27 Jan 2021. Traffic on KMP-KGP Expressway will also be impacted and Interchanges at Kundli, Assaudha and Badli will not be accessible to traffic movement on these dates.

“Therefore, all commuters are being advised not to use these routes on these dates, to avoid any inconvenience,” said the advisory.