Randeep Hooda, who turns an ‘all black’ antagonist in Radhe, would love to explore the action genre more 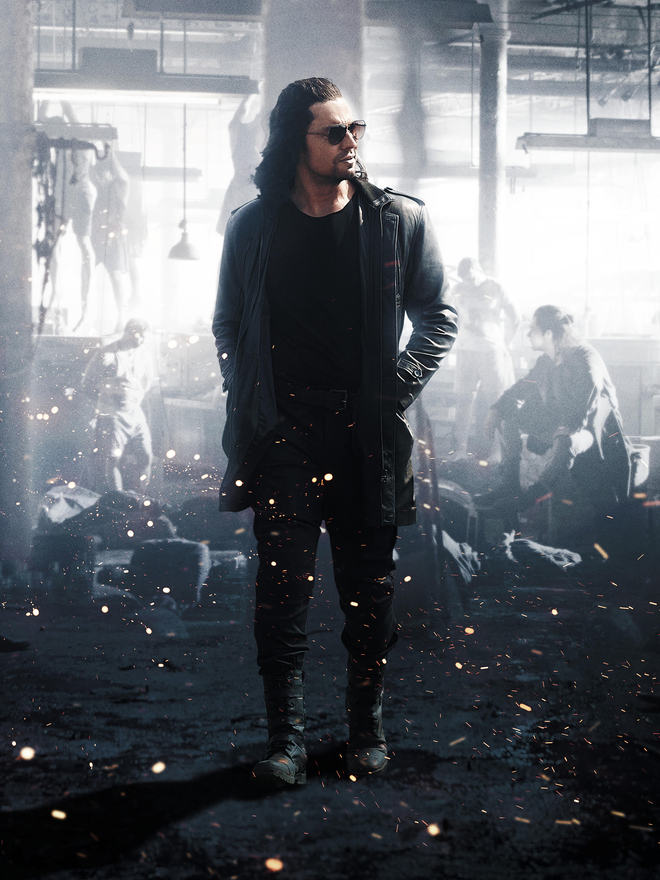 Randeep Hooda in a still from Radhe

The actor we have so loved to see in many shades of grey suddenly turns all black! Randeep Hooda reveals that in his forthcoming film, the much-touted Salman Khan-starrer Radhe, his character Rana is not only black ‘within and outside’ but wears black too. Unlike the nuanced, much explored parts he has slipped into time and again, this, vengeful, un-remorseful baddie sure has been created with broad brush strokes, the kind of a character that requires none of the method acting he is best known for. He adds, “Here you have to surrender yourself to what the makers want who make it — larger than life. You go with the flow, but the results are the same.”

What made him say yes to a Salman Khan film, essentially a one-man show? Well, he has no qualms in dittoing the same, “It sure is a Salman Khan film and I am not saying — go watch a Randeep Hooda film.” But since he has shared great onscreen camaraderie with the superstar, who was very keen on Randeep playing the part, saying anything but yes was a no-brainer. “I always say in jest — in Kick I chased him, in Sultan I trained him and in Radhe I am testing him.”

On the face of it, Radhe sure looks like a masala entertainer. Considering that the film is set for hybrid release (pay per view on Zeeplex and in theatres), does he think it will work on OTT where viewers are demanding more and not more of the same? He agrees, “Undeniably, audiences’ tastes have changed. What would have happened in a few years has been accelerated in a few months.” But he also reminds how yet another actioner of his, the Hollywood biggie Extraction has gone down as one of the most viewed films on OTT. Action is something he has not done often enough. But since it comes naturally to him, perhaps because of his background in sports, he would love to explore the genre more.

His presence on the OTT platforms might be limited, but he was seen in Mira Nair’s A Suitable Boy, which he doesn’t consider a ‘project’ for he did it for Mira and all it involved was four days of work! In future, there is a series Inspector Avinash, based on real-life cop from UP. But he is not so much for the workload-centric, longer format of OTT. Besides, he considers himself essentially a film actor and that is why an escapist fare like Radhe too works for him. “In the gloomy times we are living in, this kind of entertainment, which takes your mind off for two hours, is a service of sorts too.”

Of course, the actor is involved in real service too and is volunteering for Khalsa Aid. Having worked with the charity organisation earlier too, he says, “They assess the situation very quickly. Last year it was more about food, this time the requirement is about oxygen. Sikhism is a great religion for it treats everybody as equal.” But if you deem stars have a greater responsibility, he says, “I am doing this as a human being. We are dealing with a dire situation, a calamity. But it’s also a testing time for human character. ”

The biggest lockdown realisation for him has been, “When all this is over, I hope we remember that we were not fighting over material things but oxygen and learn to be kind to nature.” The otherwise ostentatious film industry, he insists, too is becoming more conscientious. Besides, he anyway leads a simpler, grounded life, which has held him in good stead. What has also kept this outsider going in the industry, dancing to his tunes without pandering to others, is a promise he made to his parents and himself. “I would not let the opinion of others, good or bad, be the source of my joy.” But trust the gifted actor to bring us joy through an array of parts. So, Radhe may be all about Sallu bhai, Rana ahem Randeep is unlikely to disappoint. Watch him draw all his fangs with unmistakable swagger this Eid (May 13th) on Zeeplex and other DTH operators.