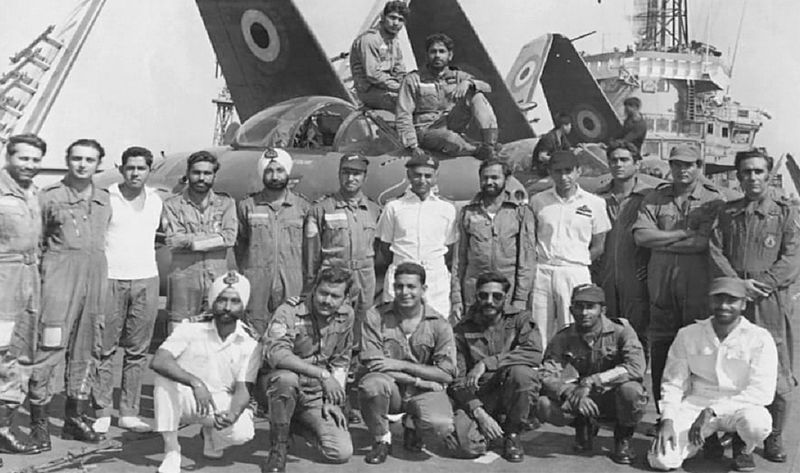 White Tigers on board INS Vikrant in the Bay of Bengal, December 1971. When the hostilities commenced, INS Vikrant was the centrepiece of the Navy’s offensive in the east. Photos courtesy: Shakuntala Parkash and Cmde M Bhada (Retd)

SWARAJ PARKASH had a spectacular career in the Indian Navy, beginning as a Sub Lieutenant in World War II and retiring as Vice Chief of Naval Staff almost four decades later, in the rank of Vice Admiral.

Parkash, the son of a schoolteacher, was born in Jalandhar, where he did his early schooling. He had an excellent academic record and was sent to college in Lahore. He appeared for and cleared the examination for recruitment to the Indian Mercantile Marine Training Ship (IMMTS), Dufferin, and a career in the merchant navy, but gave up that option and chose to join what was then the Royal Indian Navy.

He specialised in navigation and commanded five ships, heading the Western Fleet and Eastern Naval Command. After his retirement from the Navy, he headed the Coast Guard, rounding off his four-decade-long career in whites.

He played a stellar role as the Captain of INS Vikrant during the 1971 war. Parkash assumed command of Vikrant in mid-1971, when war clouds loomed over the subcontinent, but a question mark hung over the participation of Vikrant in the war. Hobbled by untrained crew, engineering defects and material problems, which directly impacted flying operations, the carrier’s availability and deployment posed a difficulty for the naval planners. While the visionary leadership of Admiral SM Nanda and Vice Admiral N Krishnan decided to bite the bullet and deploy the carrier in the main theatre of operations, that is the Bay of Bengal, from June 1971 onwards, it needed someone of the calibre of Parkash to galvanise the rank and file of the ship and deliver the goods.

Parkash was instrumental in getting the ship going, in backing his engineers to resolve its boiler problems and much else through typical Indian innovation, and in working up his air squadrons to perfection. Almost miraculously, within four months, the carrier and its aircrew were raring to go. Parkash meant business in preparing for war. In the words of the late Vice Admiral BR Chowdhury, who served as Parkash’s Chief Engineer at that time, “Vikrant got ready for war because of the unique leadership and interdependence which spontaneously developed under a competent, wise and humane command.”

When the hostilities commenced, Vikrant was the centrepiece of the Navy’s offensive in the east, and the relentless operations of the vessel’s air wing resulted in the destruction of enemy shipping, port infrastructure — particularly in Chittagong and Cox’s Bazaar — and lines of communication, leading to the strangulation of East Pakistan at sea and contributing to the Pakistani surrender at Dhaka.

For his leadership and for the risks he took in operating in hazardous waters close to the enemy coast and yet ensuring an accident-free outcome, Parkash was awarded the Maha Vir Chakra. His comrade during the war and then skipper of INS Kamorta, Capt (later Vice Admiral) MP Awati, described Parkash’s feat as “a masterful display of seamanship and shiphandling”.

One instance of this attribute of Parkash’s came to the fore on the afternoon of December 4, 1971, when Vikrant was ordered to strike Chittagong. At that time, the other fleet units were on a submarine search-and-attack mission and Vikrant had no anti-submarine or anti-air protection. Launching an air attack then would have seemed foolhardy, and many of Parkash’s officers advised him against it. After deliberating on it for some time, Parkash said, “Like bloody hell. I did not come to this point to turn back without attacking. Launch the strike.” Capt CM Vyas, the Fleet Operations Officer at the time, described the order thus: “Those were the sweetest words I ever heard. Here was leadership of very exceptional quality.”

This extraordinary respect that Parkash got from his seniors, peers and subordinates is evident even today. Rear Admiral Santosh Kumar Gupta, Commander of the Sea Hawk squadron during the war and himself a Maha Vir Chakra awardee, describes Parkash:

“Capt Parkash was a thorough professional. Very mature and stable by nature, he was a person who inspired confidence all-round. I was soon to acknowledge that he was an extraordinary Captain who was temperamentally cool and relaxed and ever ready to take prompt action in any emergency. He was a true leader of men. Prior to 1971, there had been seven Captains of repute of Vikrant I had served with, and I can say with confidence that he was the most exceptional, and I was indeed fortunate that I saw him at close quarters.”

Parkash’s direction officer on Vikrant, Lt (later Vice Admiral) PJ Jacob, adds: “His outstanding qualities of leadership made Vikrant, with all her limitations, a well-knit fighting unit and ensured success of operations in the Bay of Bengal. He was indeed the right man for the task.”

While the Navy, at all levels, is about teamwork, some people stand out for their contributions, and Parkash was one of them. ‘The right man for the task’ was the silent hero of our triumph, and the nation owes a debt of gratitude to his stewardship of Vikrant at a critical juncture when the nation was at war.