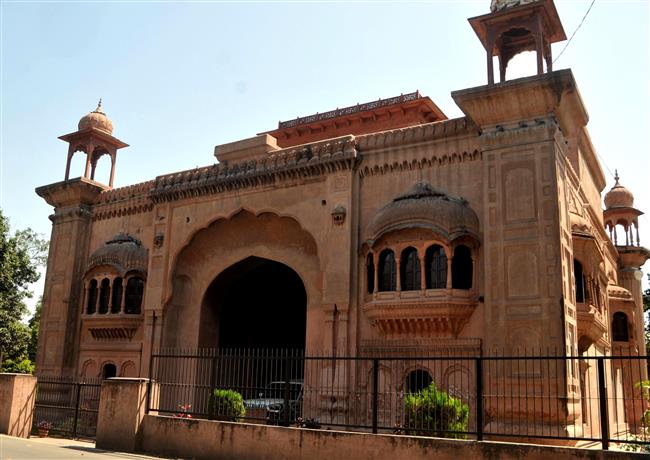 Ignoring heritage: From being the main entrance to Maharaja Ranjit Singh’s palace, the historic Ram Bagh Deodhi seems a relic in the backyard. Vishal Kumar

The two-storied Ram Bagh Deodhi behind the Ram Bagh, presently known as the Company Bagh, was the main entrance gateway to the Summer Palace complex of Maharaja Ranjit Singh.

The building stands tall with a beautiful and majestic baradari atop it. However, the hustle and bustle which it might have grown accustomed to the great Sikh Maharaja’s life is long lost. The young generation might not even be aware about its relevance and history.

Ironically, what was once a main entrance to the Maharaja’s Ram Bagh is not a relic of the old times lying in the backward as the main entrance of Company Bagh has shifted towards the Mall Road.

Before the haphazard construction of high-rise buildings, the Darbar Sahib could be seen from Deodhi. In fact, the Maharaja used to sit under Baradari on top of Deodhi and would look over the holy place. Almost square, the building is situated on the Southern side of garden and is orientated in North-South direction. Originally, the Deodhi consisted of central covered passage flanked by two storeyed wings for on guards on each side. Each of the wings consists of two rooms.

Later, after the Anglo-Sikh war of 1841, the British had connected the two flank of the first floor by a wooden bridge. The other change made then was of including intersecting of stone arched frame in the southern.

The terrace is surmounted by a square in plan and the turrets on four corners rising from the plink level are crowned by domed cupolas. The inner ones are square whereas the outer ones are hexagonal.

The facade of the gateway contains beautiful projecting balconies. The exterior and interior of the building were decorated with floral and geometrical designs. Balconies and jarokhas are projected on the outer wall. The ‘jailis’ of the baradari atop the building are finest example of cut work, which the expert artisans has restored to its apt glory. The deodi was used as a museum till few years ago after it was declared a protected monument.