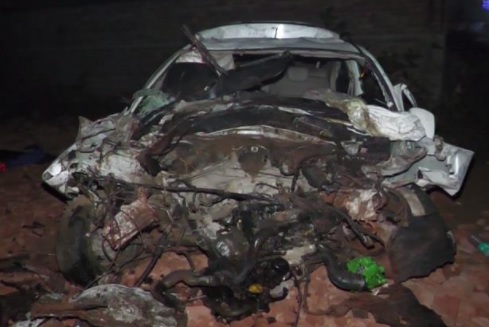 Five employees of a privae hospital here were killed and another was critically injured in a road accident near Sadhrana village in the wee hours of Friday.

They were on their way to hospital after attending the marriage ceremony of their colleague at Sadhrana when their car collided with a pile of bricks and overturned. Five of them died on the spot while one is battling for life in hospital.

According to the police, the accident took place around 1 am when six employees of Genesis Hospital in Sector 84 were returning to the hospital. It was on the Harsaru-Sadhrana road that their speeding Swift Dzire car went out of control and collided with the bricks on the roadside and overturned. The collision was such that five of them died on the spot while the sixth was seriously injured. A police team reached the spot after getting information and retrieved the bodies from the mangled car.

The injured has been identified as Hardik Tiwari (21), a resident of Lucknow.

The deceased Jagbir was an electrician, Prince store head, Sagar ambulance driver, Niyaj Khan housekeeping in-charge while Jiwat was a medical staff. Injured Hardik Tiwari is on the reception staff of the hospital.

A hospital staff said that they were returning from the marriage of a hospital employee.

“We have kept the bodies in the mortuary and informed the families. We are investigating the matter,” said sub-inspector Rakesh Kumar.