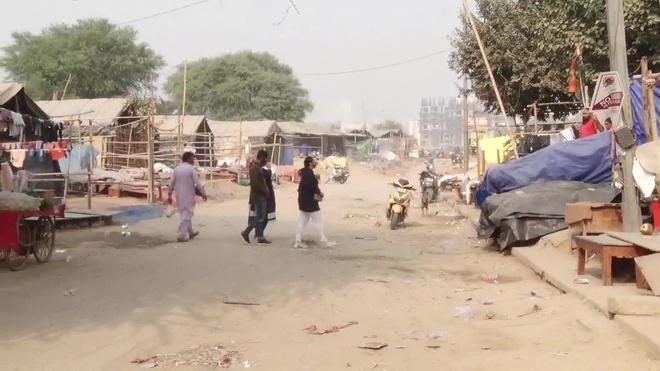 The Banjara market in Gurugram wears a deserted look on Saturday. Tribune photo

The famous Banjara market here was shut on Saturday in protest against an extortion bid on Friday night. Around 15 men came and threatened the shanty owners and thrashed one of them, allegedly seeking weekly protection money.

The incident happened around 11.30 pm on Friday, when the accused, identified as Sitam, alias Satish, of Wazirabad village, allegedly reached the market in his Creta car along with his henchmen. They allegedly demanded weekly protection money and when a shopkeeper, Jitu, objected to it, they thrashed him and his wife badly. Jitu got a fracture in his leg and is undergoing treatment at the Anand Hospital in Sector 56.

Soon, other shopkeepers gathered and the accused fled the spot, leaving his car behind. Angry shopkeepers then smashed the window panes of the vehicle and the police were called.

“My family and I were sleeping in my shanty when Sitam came and asked for shop rent. I sought two-three days time, but Sitam started thrashing me with a rod. He hit my left leg. When my wife Asha tried to save me, he pushed her too and she fell on me. She then raised alarm and Sitam fled the spot. He, however, threatened to kill me if I fail to pay him the extortion money in the name of rent,” Jitu told the police.

Following the incident, the shopkeepers on Saturday shut the Banjara market and said they would open only after the accused are arrested.

Meanwhile, the police said they were conducting raids to nab the accused.

Notably, the market has been home to over 2,000 people — mostly from the Gadiya Lohars nomadic community, originally hailing from Chittorgarh, Rajasthan, who stay in the shanties spread over 25 acres in Sector 56.

Last month, the Haryana Shahari Vikas Pradhikaran (HSVP) demolished over 250 makeshift shops and hutments to reclaim the 25-acre encroached land at the Banjara market, which is a popular destination in Delhi-NCR for affordable home decor and furniture.