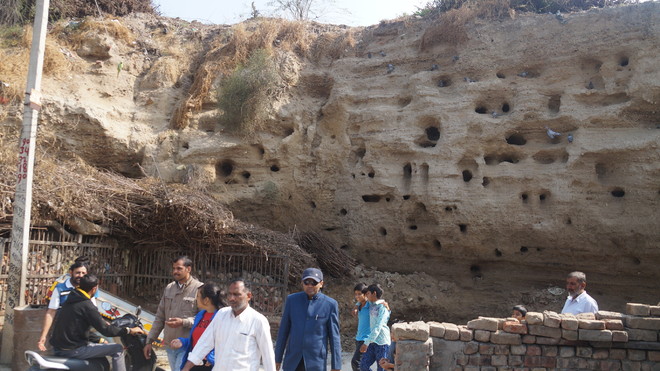 The Harappan site of Rakhigarhi in Hisar district. Tribune photo

After a gap of three years, the Harappan site of Rakhigarhi in Hisar district has drawn the interest of archaeologists. While a team of the Archaeological Survey of India (ASI) has started digging up at the site, Prof Vasant Shinde, former Vice Chancellor of the Deccan College, Pune too is keen to start excavation in collaboration with the Central University of Haryana (CUH), Mahendergarh.

CUH Vice Chancellor Prof Tankeshwar Kumar stated that Prof Shinde had held discussion with him and a final course for the excavation project was likely to be laid soon. He said the CUH had a team of archeologists who had shown interest in Rakhigarhi. They had brought out significant facts about the lives and times of the indigenous culture and people nearly 5,000 years ago.

Sources said RSS ideologues Suresh Soni and Tarun Vijay too had made several visits to Rakhigarhi recently. The RSS ideologues have assured the residents of developing Rakhigarhi as a centre of ancient culture of the country.

The ASI had made a significant discovery in Rakhigarhi when Professor Amarendra Nath, the then director of ASI carried out an excavation in 1997-2000. He wrote in his report that Rakhigarhi had made a substantial contribution in scientific and technical fields in its time.

Rakhigarhi grabbed the attention of the archeologists the world over when five skeletons were found at the site during excavation by the team of Deccan College, Pune, headed by Vice-Chancellor Prof Vasant Shinde in 2015.