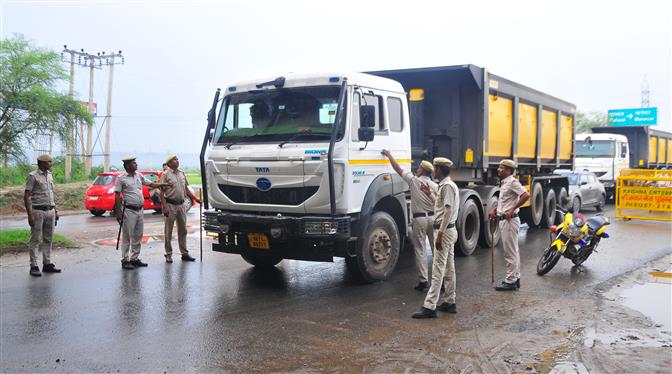 In the back-of-beyond district of Nuh, locals insist the police call the shots and nothing moves without their “consent”, leave alone a dumper of illegally mined stones getting away without being noticed.

A judicial probe is underway. The claims will be investigated thoroughly. Anil Vij, Home Minister

The fire raging around illegal mining in the Aravallis in Nuh, after a DSP was mowed down while trying to stop a dumper, is on the doorstep of the police, and they are on the defensive. The locals claim in the remote villages of Firozpur Jhirka block bordering Rajasthan, Rs 15,000 per month per dumper is paid to an “agent”, who splits it among various stakeholders, “including the police”. A villager from Jhirka claims, “A stone-laden dumper from our village travels 4 km up to the crushers. There is only one police station in Punhana. Once the cut is paid, it is the responsibility of the police to get the vehicle freed in case it gets caught. I have witnessed many meetings held to resolve such issues.”

In case a flying squad comes from Chandigarh or a new officer takes over, villagers are sent a message to suspend operations for a few days till things get settled.

A resident of Badaed village claims after the DSP’s murder, he received a message to send all dumpers to Rajasthan. “I will get the vehicles back after the dust gets settled,” he says, adding it is a Rs 50-lakh business. He claims cops keep them “informed” about raids.

Villagers allege the rates are higher for vehicles covering a longer stretch and there is no getting away from the agencies involved in checking — the police and mining and RTO staff – without paying the cut. In Tauru, a villager alleges the police turn a blind eye to everything for a price. “Mafia people load loose stones on dumpers and take it to the crushers after paying money at nakas. This way they make Rs 7,000 per trip. The charges for carrying out fresh blasting are higher. Officials take Rs 30,000-50,000 to overlook any complaints of blasting taking place at night. The police only show up in the morning no matter how many complaints are made,” he alleges.

Refuting the charges, district police chief Varun Singla says, “We have 14 police stations and nearly six nakas along the highway till the Nuh-Rajasthan border. If a dumper actually pays Rs 15,000 per police station, it works out to be an expensive proposition. The charge is totally baseless.”

Stating that cops only accompany the mining or RTO staff to check illegal mining or overloading, Singla said most of these dumpers use internal roads. “Tracking such vehicles is a tough task. The drivers don’t stop even when intercepted. When we do nab them, the court releases their vehicles and they get back on the road,” he says.

Talking to The Tribune, Home Minister Anil Vij said the claims of the locals “could be true or untrue”. “That is why we have ordered a judicial probe. In the past eight years, no violent incident has taken place. During the Congress regime, four cops were crushed to death. The cases were closed after tagging these as untraced or accidents. We have imposed a lot of checks,” he said.