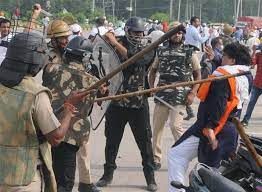 The one-man Commission of Inquiry (CoI) set up by the Haryana Government to inquire into the sequence of events that led to violence in Karnal began its probe today.

The panel will ascertain persons responsible for the situation and will inquire into role of IAS officer Ayush Sinha, the then Sub-Divisional Magistrate, Karnal, in the action by the police on August 28. — Somnath Aggarwal, Retd Judge, HC

Justice Somnath Aggarwal, a retired judge of the Punjab and Haryana High Court, was appointed as head of the Commission of Inquiry last month.

Talking to reporters here today, he said since the commission had to inquire the entire sequence of events, leading to the incidents at Bastara toll plaza in Karnal on August 28, “the inquiry will take about four or five months” to complete.

The government appointed the inquiry commission “in a bid to ensure fair and transparent inquiry to inquire into the sequence of events leading to incidents at Bastara Toll Plaza in Karnal”, he added.

“The Commission will ascertain persons responsible for the said situation and will also inquire into role of IAS officer Ayush Sinha, the then Sub Divisional Magistrate, Karnal, in the action by the police on August 28,” Justice Aggarwal said.

The inquiry commission will complete the inquiry and then submit the report to the state government in a month, from the date of publication of the notification in the official gazette, the statement had said.

Ayush Sinha, a 2018-batch IAS officer, was caught on tape while allegedly telling personnel to “break the heads” of protesting farmers if they breached the barricades near the spot where the BJP’s event was taking place.