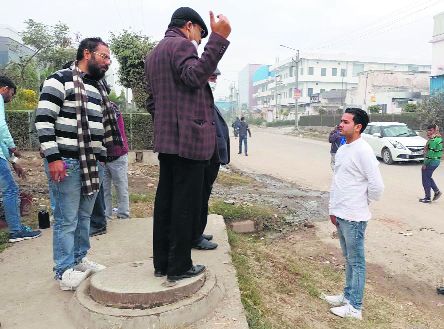 A team inspects the industrial zone of HSIIDC in Barhi, Sonepat on Tuesday. Tribune Photo

Members of the River Yamuna Monitoring Committee (RYMC), along with a team of the State Environment Surveillance Task Force (SESTF), on Tuesday raided the HSIIDC industrial zone at Barhi and found direct violation of pollution norms.

Delhi-based environmentalist Varun Gulati, in his complaint, said untreated effluents were being discharged by industries in connivance with the local pollution board and the HSIIDC officials into drain No. 6 through storm water lines by bypassing the common effluent treatment plant

The team found untreated industrial effluent discharge directly into drain No.6, which is connected to Yamuna river. The team collected samples of the effluents discharged from the storm water pumping station and of the CETP established by the HSIIDC.

A Delhi-based environmentalist Varun Gulati had filed a complaint with some videos to the higher authorities of the Haryana State Pollution Control Board (HSPCB), showing how the untreated effluents were being discharged by the industries in connivance with the local pollution board officials and the HSIIDC officials into drain No. 6 through storm water lines by bypassing the common effluent treatment plant (CETP) in the Barhi industrial zone.

The CETP of the capacity 16 MLD was being run by a contractor company and industrialists here are discharging their untreated effluents directly through their storm water lines by bypassing the CETP, the sources added.

Varun Gulati, the complainant, said that the HSIIDC had developed the industrial zone and the CETP of 16 MLD had been established here. But, the industrialists here are in connivance with officials of the local pollution board and HSIIDC directly violating the pollution norms for a long time and polluting the Yamuna, he said.

Kamaljeet Singh RO, HSPCB, said the joint team caught direct violation of the pollution norms at the HSIIDC Barhi today. The industries have two discharge lines, one for rainwater discharge and other for effluent discharge, but effluent is being discharged through storm water lines here, he added.

Three such stations have been found which were directly pumping the industrial untreated effluents into drain No. 6 directly, he added. Samples of the effluent have been collected, he said.

Besides, the HSIIDC officials have been directed to immediately shut these storm water access points, he said. Notices would be served to the HSIIDC for violating the norms and environmental compensation (EC) would be imposed after receiving the sample reports, he said.

Besides, the samples taken from the CETP on December 4 last year were also found failed, he added. Besides, the HSPCB also imposed a penalty of Rs 15 lakh on the HSIIDC Barhi earlier.

Besides, three industries have also been inspected where some violations were also found and directions have been issued to them, the RO maintained.