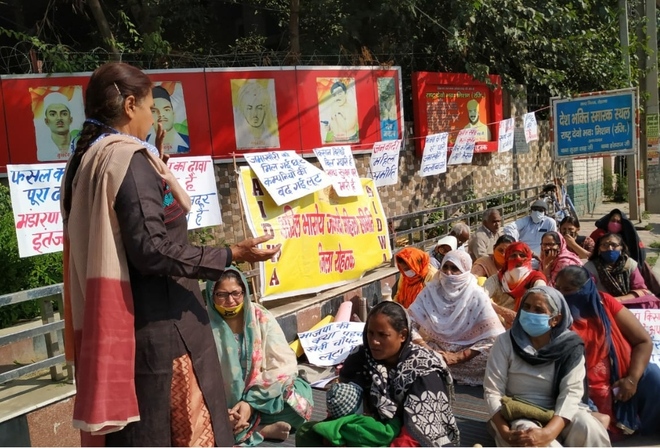 Expressing solidarity with agitating farmers, women activists under the aegis of Janwadi Mahila Samiti on Saturday came forward to resist the three farm laws. They staged a day-long dharna at Ambedkar Chowk here. They demanded that the government should annul these laws.

“The three laws will not only ruin the farmers but will also adversely affect the system of food security. These will also spoil the public distribution system meant for poor people. Hence, the government should cancel these laws,” claimed Jagmati Sangwan, national vice-president of the samiti.

Sheela Devi, while presiding over the dharna, said the report of United Nations Organisation revealed that over 10 lakh children had lost their lives in India due to malnutrition. In the given situation, it was the responsibility of the government to ensure food to every citizen. But the three farm laws were posing a serious threat to food security, she added.

Raj Kumar Dahiya, another woman activist, demanded that the government should strengthen the public distribution system, curb rising inflation and include the names of every poor person in the BPL list.

Ambala: Farmers under the banner of Bhartiya Kisan Union (Charuni) took out a bike rally in Ambala to motivate farmers and other people to join the Kisan Yatra, which will start from the Shambhu Border on November 25 for Delhi.

The farmers started the bike rally from Panjokhara, and covered the villages of Shahzadpur and Naraingarh block.

BKU (Charuni) spokesman Rajiv Sharma said, “Farmers will start a Kisan Yatra on November 25 and reach Delhi on the November 26 rally and hold protest against the three farm laws. The farmers of four districts, including Ambala, Yamunanagar, Kurukshetra and Panchkula, will gather at the Shambhu border and start the Kisan Yatra while the remaining will join on the way.”