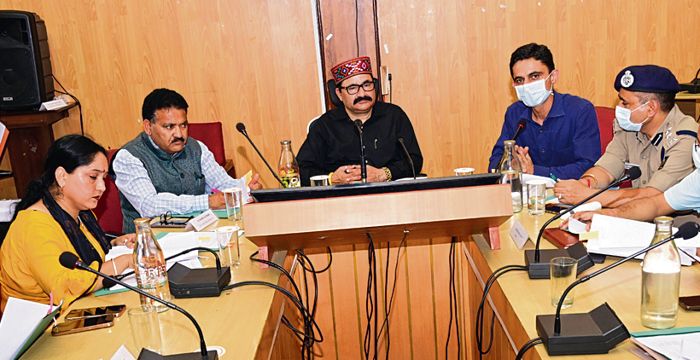 Minister Govind Singh Thakur presides over a meeting in Kullu.

Education and Art, Language and Culture Minister Govind Singh Thakur said that the seven-day-long international Kullu Dasehra festival will commence from October 5. While presiding over a meeting convened for the organization of the festival here today, he said that for the last two years, Dasehra festival could be celebrated only symbolically due to Covid, but this time Dasehra will be celebrated on a large scale and with gaiety. The festival this year would be linked to “Azadi ka Amrit Mahotsav”.

The allotment of plots at the Mela Ground will start before September 25 and transparency will be ensured in the allotment process. —Govind Singh Thakur, Culture Minister

The minister directed all the departments to gear up for the festival. He asked the district administration to constitute separate committees. He said that the festival souvenir would be published in a new format as it was the pride of the festival and helped preserve the memories of the event. He added that articles of budding writers and historians would be included in the souvenir.

The leader said that cultural evenings would be organized in the open air auditorium Kala Kendra and these should be spectacular. He directed communication through the Indian Council for Cultural Relations and Embassies to invite international level artistes for the festival. He said that it was the responsibility of the festival committee to provide opportunities to local artistes in the festival. The artistes should be selected only through auditions.

Thakur said that the works of repair of roads, electricity, drinking water lines, sanitation and beautification of Dhalpur Maidan and temporary places of deities should be completed by September. Invitation letters should be sent to the deities of the district on behalf of the organizing committee. He directed that all necessary facilities to the deities and the persons accompanying them should be provided.

The minister said that allotment of plots at the mela ground would start before September 25 and transparency would be ensured in the allotment process. He said that adequate dustbins and temporary toilets would be put up during the festival to maintain cleanliness. Additional sanitation workers would be deployed through the Kullu Municipal Council. The minister said the police would prepare a plan regarding security and traffic arrangements and CCTV cameras would be installed in the city.