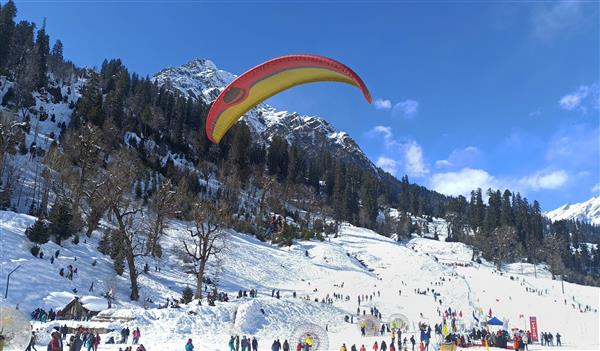 Tourists enjoy paragliding at the snow-covered Solang Nullah in Manali on Friday. PTI

The biting cold wave continued unabated in most parts of Himachal in spite of dry weather. The minimum temperatures stayed two to seven degrees below normal and hovered around the freezing point at many places.

Keylong in Lahaul and Spiti district experienced the coldest night of the season at minus 16.7°C, seven degrees below normal, while high-altitude tribal areas and mountain passes witnessed Arctic-like conditions with the mercury staying 16 to 24 degrees below the freezing point.

Thick ground frost was witnessed in mid and higher hills, making driving hazardous while thick fog at some places in lower hills reduced visibility. Water froze in pipes and pipes burst at several places in higher hills, affecting supply. Natural sources such as springs, lakes, rivulets and tributaries of major snow-fed rivers in high-altitude areas are frozen, drastically reducing the discharge of water.

The maximum temperatures rose marginally but strong icy winds sweeping the region deprived people of the warmth of the sun. Bilaspur was the hottest in the region at 21°C, followed by Kalpa 3.2°C, Kufri 7°C, Dalhousie 8°C, Manali 10°C and Shimla 10.4°C.

Meanwhile, the local MeT office has predicted dry weather in the region for the next four days from January 29 to February 1.