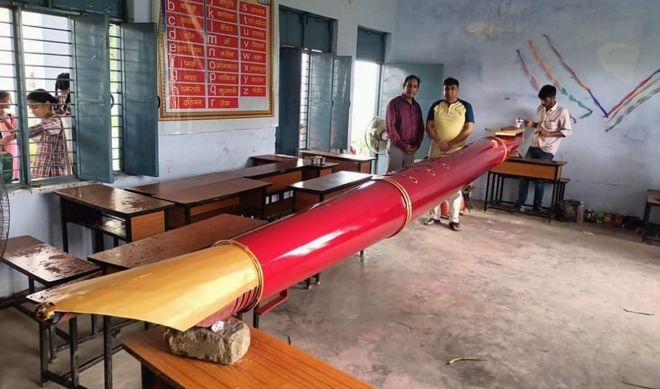 A unique pen measuring 20 feet and weighing 43 kg has been made by a team of teachers at Government High School, Naurangabad, at Nahan in Sirmaur district as a teaching and learning aid.

Named “Shakti”, the pen was installed on the school premises by Nahan MLA Rajiv Bindal yesterday.

The team, led by the school headmaster Dr Sanjeev Attri, made this ink pen after putting in three months of strenuous efforts. It was designed by Dr Attri, who himself is a science teacher and encourages students to take up new initiatives.

Made of metal and wood, the pen has attracted onlookers. The school management wants its entry into the Limca Book of Records as the biggest pen.

The pen could help students in learning and teaching. “A teacher, who is absent, can record his lecture and sent it to other teachers. The lecture can be aired through the pen which has a sound sensor, ” said Dr Attri.

It is also equipped with CCTV cameras and can keep tabs on students. Its footage will be controlled by the school management. Additional features like an alarm for prayers and an in-built audio player further enhance its utility. It can be charged with solar power.

the pen, has been pooled by six teachers.

Divided into three parts, it comprises a top lid, the middle trunk and nib. The nib and shaft of the pen measure about two-and-a-half feet of the total 20 feet. The pen can also be used to write as the provision of filling ink through a pipe has also been made.

“Two-litre ink was pumped into the pen using glucose bottle. An effort was made to make a look-alike of an actual pen and this involved several modifications in the design. Several workers were approached to make its parts,” added Attri.

Dr Attri has other initiatives to his credit. He had kickstarted “Hello Moginand”, a new All-India Radio destination developed by him while he was working at Government Senior Secondary School, Moginand in Nahan. It was a platform for airing educational as well as social awareness programmes.

Being the state’s first and country’s sixth educational radio station, a group of 14 students, had been successful in securing a 24-hour slot on the AIR’s Shimla station in 2019.

Dr Attri, who had joined this school 18 months ago, said, “Since the school lies in a remote area, childern of the Gujjar community study here.

The school strength, which was merely 65 last year, has now touched 130 with more girls studying in the school. Efforts have been made to rope in dropout girls by encouraging the Gujjar community to educate their children.”