Farooq not being allowed to leave house a 'new low' in curtailment of rights in J-K: Gupkar alliance : The Tribune India

Farooq not being allowed to leave house a 'new low' in curtailment of rights in J-K: Gupkar alliance

Farooq Abdullah, who represents Srinagar in the Lok Sabha, was supposed to visit the Hazratbal shrine, on the banks of the Dal Lake, to pray there on the occasion. 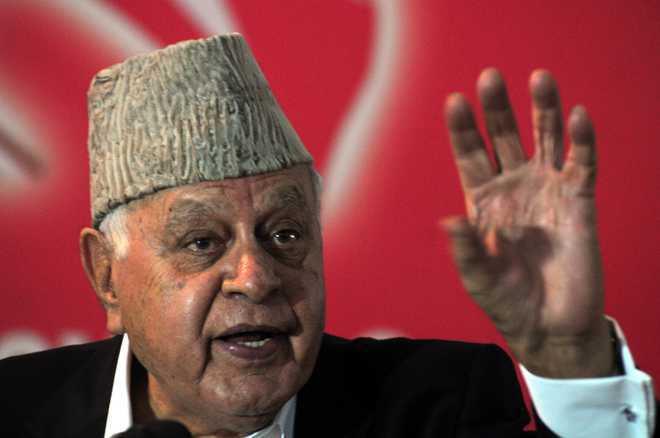 Farooq Abdullah, who represents Srinagar in the Lok Sabha, was supposed to visit the Hazratbal shrine, on the banks of the Dal Lake, to pray there on the occasion. Tribune file image.

The Peoples' Alliance for Gupkar Declaration (PAGD) on Friday said National Conference president Farooq Abdullah not being allowed to leave his house to visit Hazratbal shrine here is a "new low in curtailment of fundamental rights" of the people of Jammu and Kashmir.

In a statement, PAGD spokesperson Sajad Lone condemned the state administration for putting a blockade outside the resident of Abdullah and demanded that it be removed.

Abdullah is also the president of the recently floated PAGD – an alliance of seven mainstream political parties in Jammu and Kashmir seeking restoration of the erstwhile state's special status as it existed on 4 August last year.

Earlier, the National Conference (NC) claimed in a tweet that the administration had blocked Abdullah's residence and stopped him from offering prayers at Dargah Hazratbal on the occasion of Milad-un-Nabi.

Lone said, "Abdullah was slated to go to Hazratbal in order to participate in the religious congregation on account of Eid-Milad-Un-Nabi, however (he) was barred from leaving his house." "We strongly condemn the actions of the state administration which are tantamount to interference in the religious rights of Dr Farooq Abdullah. This marks a new low in the curtailment of fundamental rights of the people of J-K. We demand that the blockade be removed so that Dr Farooq Sahib is able to perform his religious duties," he said.

The PAGD also "unequivocally and unambiguously" condemned the killings of three BJP workers by militants in Kulgam district of south Kashmir on Thursday.

"Political differences cannot justify use of violence. Violence has always and will crowd out sanity. We will always fight aggression in all its forms irrespective of the source of aggression," Lone said.

The Resistance Front (TRF), believed to be a shadow group of the Lashkar-e-Taiba, has claimed responsibility for the killings. PTI