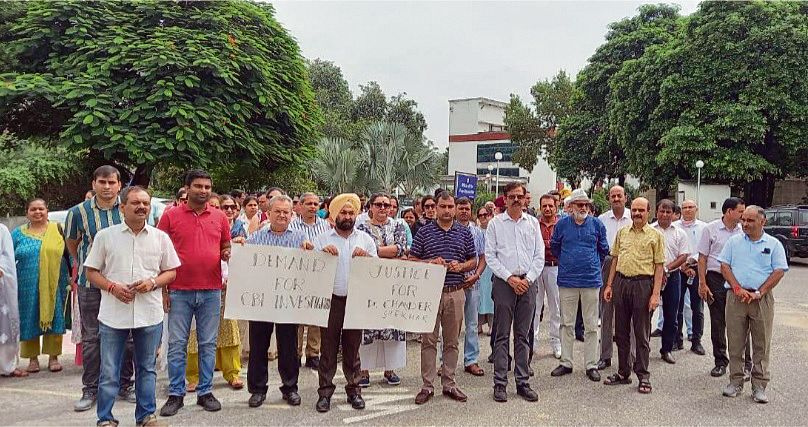 The Jammu University Teachers’ Association during a protest, seeking a CBI probe into an associate professor’s suicide case.

A PhD scholar of Shri Mata Vaishno Devi University (SMVDU), Katra, has accused a faculty member of sexual harassment. The university has sent the accused on leave.

The university, in a statement to mediapersons, stated that its internal complaints’ committee had received a complaint from a female scholar regarding sexual harassment. Headed by a senior female faculty member, the panel has initiated an inquiry. “The university shall ensure that the inquiry is taken to its logical conclusion in a time-bound manner. Action as warranted under rules shall be taken,” the institution stated, adding that the faculty member in question had been relieved of his duties till the completion of the inquiry.

Recently, a similar case surfaced in University of Jammu when an associate professor was accused of sexual harassment by students. On September 7, Associate Professor Chander Shekhar (psychology department) had ended his life after he was suspended by the university.

Later, protests by faculty members as well as students had rocked the university as demonstrators sought a high-level probe. The police have formed a special investigation team (SIT) to probe the case.

The Jammu University Teachers’ Association (JUTA) has been on a pen-down strike for many days over the suicide. Prof Pankaj Srivastava, president of the JUTA, said, “As the association strongly believes that the administration has failed to fix the responsibility of the procedural lapses in the case pertaining to Chander Shekhar, we demand a CBI inquiry as the local police may come under pressure from various stakeholders in the university.”