2 drown as SUV falls into canal

SUV, bodies taken out after 12 hours 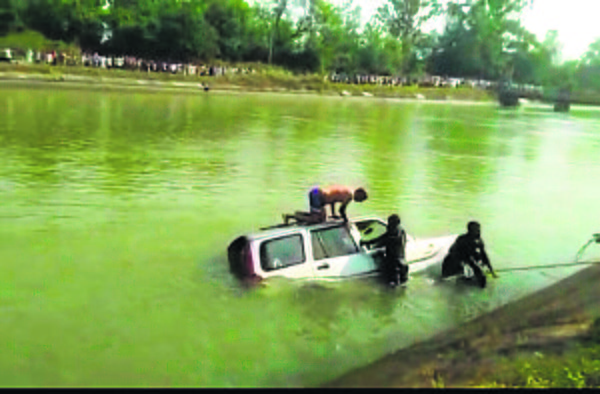 Divers try to take out the SUV from the canal in Dasuya.

Two men drowned, when the SUV in which one of them was travelling in fell into the Mukerian Hydel Canal from over a bridge near Dasuya’s Baja Chakk village late Saturday night.

According to the information, Sarbjit Singh (38), a resident of Marasagarh, was taking a turn over the bridge, when he lost control over the SUV. During this time, Gurwinder Singh (44), a Naraingarh resident, who was present at the spot, held onto the steering to get the drowning vehicle out of the water, but he, too, fell into the canal along with the vehicle as the water flow was very high.

Eyewitness Gurmeet Singh, a resident of Galowal, said the entire incident happened before him. He tried saving them by pulling them out with the help of the cloth tied on his head, but it, too, tore off. He then informed the people around him and the Dasuya police.

DSP Anil Bhanot reached the spot along with the police party and started looking for the car and the two men. As the incident happened at night, the search operation was carried out with the help of the lights of different vehicles. But even after five hours, the vehicle and the men could not be traced. In the morning, the search operation was resumed with the help of divers in the presence of SHO Dasuya Gurdev Singh. After three hours, the divers succeeded in locating the car and the body of Sarbjit Singh inside it.

They then started looking for the body of Gurvinder Singh and it was recovered from Mukerian Hydel Power House No. 5. SHO Dasuya Gurdev Singh said both bodies have been kept at Dasuya’s mortuary. After the post-mortem, the bodies would be handed over to their family members. The police have registered proceedings under Section 174 of the CrPC.