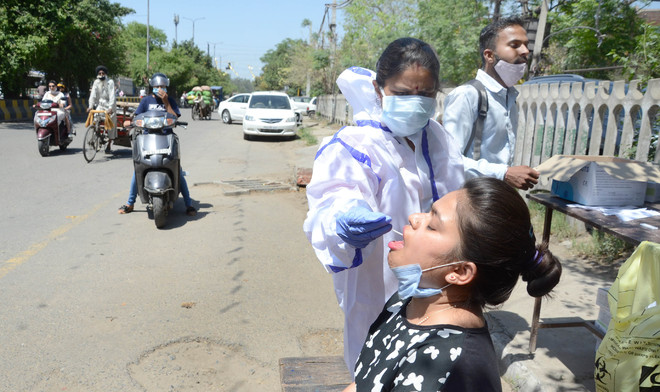 Of the 502 fresh cases, as many as 85 patients belong to other districts. Besides, four persons died of Covid in Jalandhar, taking the toll to 973. While 29,073 people have been discharged so far, there are 3,315 active cases in the district.

On an average, the district is witnessing around 300 to 400 fresh cases per day. On many days, the number crossed the 400 mark. However, during the new strain, over 500 cases have been witnessed only on March 18 when the district recorded 510 fresh cases.

Though vaccination is in full swing in the district with mobile vans, educational institutes, offices, etc, also serving as vaccination centres, the intensity of the new strain is, however, not being countered despite the much-intensified vaccine drive.

In Kapurthala, 111 people tested positive for the virus today. Besides, two deaths were also reported in the district. The deceased are: a 38-year-old man of Phagwara, who died at a PIMS in Jalandhar, and a 62-year-old woman of Dhilwan who died at a private hospital in Jalandhar. The tally of cases in Kapurthala touched 10,038.

Meanwhile, the Hoshiarpur district reported six more deaths due to Covid-19, taking the toll to 617 on Friday. Besides, the district also witnessed 141 fresh cases, taking the tally to 14,945.

Out of today’s 141 positive cases, 17 patients were from Hoshiarpur city, 24 were reported from other districts and the remaining others were from various health blocks of the district. Three patients died in Hoshiarpur hospitals and one each at Patiala, Dasuya and Amritsar hospitals.