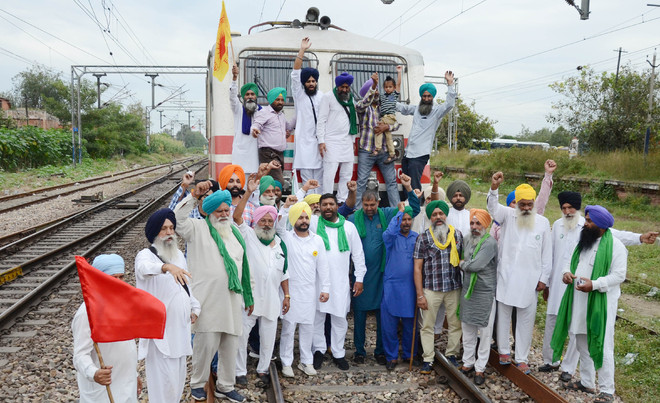 Farmers hold a protest demanding action in the Lakhimpur violence, in Jalandhar on Monday. Sarabjit Singh

The protests were organized across the state on behalf of farmers’ groups, stated district leaders of the SKM. On behalf of members of the Bhartiya Kisan Union (Rajewal), a sit-in was organised at Dakoha Gate near Jalandhar cantonment railway station. The blockage continued till 4 pm, causing cancellation of nearly a dozen trains.

Members of the Bhartiya Kisan Union (Doaba), under the leadership of Satnam Singh Sahni, sat on the railway tracks affecting goods and passenger train services in Phagwara. They demanded the sacking of Ajay Mishra from the Cabinet, the alleged main accused in the Lakhimpur Kheri incident in which five farmers were mowed down while protesting against the contentious farm laws.

Speaking on the occasion, farm leaders stated that as long as the government did not change its stubborn attitude their protest would continue. He appealed to local residents to unite in their movement against the government to repeal the three black laws. Apart from that, the Delhi morcha would continue till the Power Act 2020 was repealed.

The farmers condemned the lynching of Lakhbir Singh at the Singhu border and told that farmers had nothing to do with the killing. Meanwhile, langar for passengers and the protesters was arranged by Baba Nidhan Singh.