Jalandhar MC yet to start fogging in slums : The Tribune India 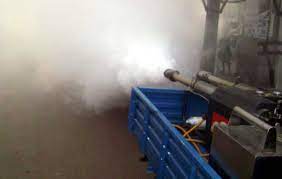 With just two months left for the year to end, slum areas in the city are still waiting for the fogging process to start, some councillors have complained.

Jagdish Samrai, the councillor from Ward No 78, has alleged that the sewerage overflow has spelled trouble for the people living in the area. “I have been to the MC office a couple of times, hoping to have the issue addressed, but to no avail. If they cannot even fix the issue of sewerage, how are they going to ensure fogging? However, it is the most important part.”

Kabir Vihar is a slum area in Ward No 77, which has around 2,200 residents. Shweta Dhir, the councilor of the ward, said, “It is strange that the MC has not been doing anything. They must understand how important fogging is for preventing the spread of diseases,” she said.

Earlier in June, MC officials had told Jalandhar Tribune, “So far, larvae have been detected in various areas of the city, which are to be destroyed. But, we would start fogging if it rains again.”

Rajkamal, Assistant Health Officer, said, “Almost every area has been covered. If any councillor has any concerns about a lack of fogging in some areas, we will cover those areas too.”