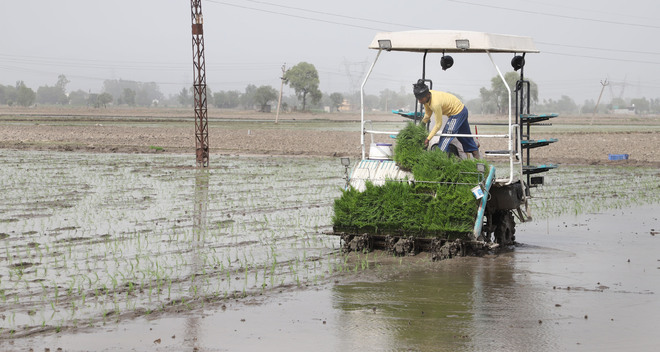 As paddy transplantation started across state on Thursday, a farmer uses mechanised technique in his fields at Dyalpur village, near Kartarpur, in Jalandhar. Photo: Sarabjit Singh

A progressive farmer from Dyalpur village near Kartarpur, Sukhwinder Singh Khakh, has been earning rich dividends after he imported a paddy transplanting machine from Japan for Rs14 lakh, a few years ago.

As transplantation work started today, Khakh said he had already got an order to transplant paddy on 700 acres in the area. “Along with two to three helpers, I daily transplant paddy on 10 to 12 acres. I charge Rs5,400 per acre from my farmers,” said Khakh adding that he has grown paddy seedlings in mat type settings.

He said he would transplant paddy on his 40 acres by using the same machine. Discussing the benefits of machine over manual method, Khakh said, “The machine-transplanted paddy fields have a higher yield. Machine is able to transplant 10-kg seeds in one acre whereas manually transplanted fields usually have seedlings of six-eight kg seeds planted in the same area. Machine does work in a very calculated manner and transplants 33 seedlings in just one sqm.”

Chief Agriculture Officer Surinder Singh said the department was expecting paddy on 1.71 lakh hectares in the district this year. “The transplantation process has started today,” he said.