Fatal accident took place outside MGN around 1.15 am 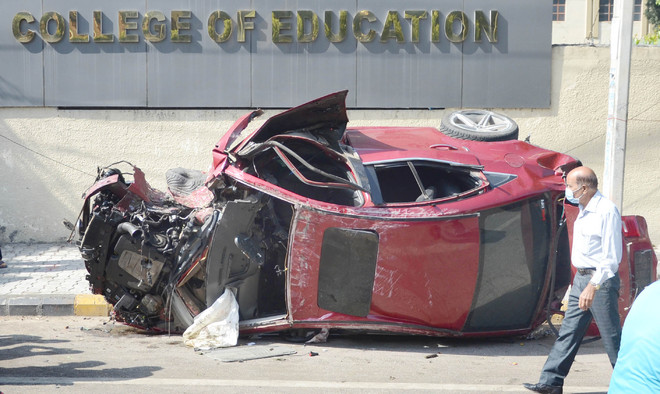 The mangled remains of the car after it hit a tree on Monday night in Jalandhar. Photo: Sarabjit Singh

The midnight gehri route turned tragic for three youths on Monday midnight after one of them was killed on the spot and two others sustained serious injuries after the car they were travelling in crashed into a tree near Kapurthala Chowk.

The fatal accident took place outside MGN around 1.15am when the driver lost control of the car and dashed into a roadside tree. The impact of the accident was such that the car flipped thrice before coming to a halt. The car broke into pieces.

Sub-Inspector Seva Singh, SHO, Police Division-2, stated that the victim was identified as Vikramjit Singh Ramgarhiya (30), alias Vicky, a resident of Prithvi Nagar, and the injured, who were real brothers, as Narender Singh (20) and Parvinder Singh (21), both residents of Adarsh Nagar.

The SHO said as per eyewitnesses, the car was being driven rashly and the condition of the car proved it. Even the steering of the car came off and fell on the road. Many parts, including the bonnet and the bumper, were found 30 feet away. The pictures and videos of the car crash went viral on social media.

Parvinder, alias Gaurav, who was sitting on the back seat, was thrown out of the car and both Vicky and Narender sitting on the driver and passenger seats, respectively, came under the overturned car.

Even as the airbags of the car (PB-08-C 777) opened after the collision, Vicky could not be saved. All the three victims were rushed to Satyam Hospital, where doctors declared Vicky brought dead and stated the condition of Narender was serious. However, with internal wounds on the legs and the back, Gaurav was discharged today.