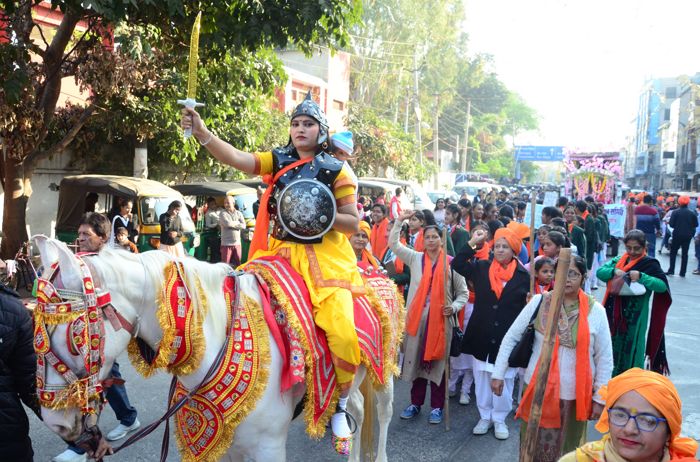 A woman dressed as Rani Laxmibai rides a horse in Jalandhar.

The Rashtriya Sewika Samiti on Wednesday organised a shobha yatra in the city to mark the birth anniversary of Rani Laxmibai.

Prior to the procession, an hour-long event was organised at Company Bagh Chowk. Only women were present in the event including some school and college girls, who came to the event carrying placards in their hands. The event was inaugurated by Renu Arora, a woman industrialist. State co-executor Karishma Kapoor recited poems highlighting the valour of Rani Laxmibai. Surbhi Sharma urged the women to continue to strive for physical and mental strength for attaining their goals.

The shobha yatra was taken out from Company Bagh Chowk towards Milap Chowk, Adda Hoshiarpur and concluded at Sain Dass School. Women activists donned the role of Rani Jhansi wearing turbans, sitting on horses, and carrying shield and sword in their hands.