Uproar over LED lights, blue boards installed in city | Proceedings began by paying tributes to farmers who died during protests 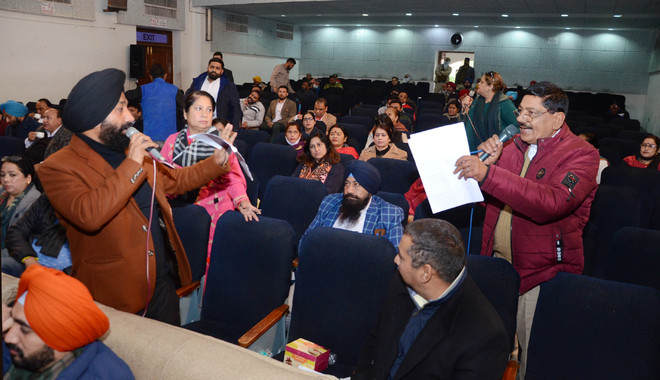 Councillors argue with each other during the Jalandhar MC House meeting on Monday. Tribune Photo: Sarabjit Singh

The Municipal Corporation (MC) General House meeting took place at the Red Cross Bhawan here on Monday. After paying tributes to the farmers who lost their lives during their agitation, the House proceedings went ahead. The meeting continued for nearly 90 minutes in which 23 new agendas along with the old ones were passed by Mayor Jagdish Raja and MC Commissioner Karnesh Sharma.

While Raja insisted on holding a zero hour and clearing the agendas first, councillors of the ruling and opposition parties asked MC officials to answer their questions regarding development-related issues.

A heated discussion between Davinder Singh Roni, councillor of Ward No.66, and Sushil Kalia forced the Mayor to intervene and told Roni to not cross the limit of the House meeting.

While Kawaljit Kaur Gullu, councillor of Ward No.67, was the first one to raise the issue of the construction of illegal buildings and encroachments in streets, the Mayor interrupted her asking her to raise a question not a complaint. Following which, the councillors in unison opposed the House proceedings and said if their questions on civic issues were being taken as complaints then there was no need to organise such House meetings. Heated arguments were also witnessed over the MC elections. Following which, Shelly Khanna, councillor of Ward No.17, said despite sending various written complaints, none was resolved.

Jaspal Kaur Bhatia, Shiromani Akali Dal councillor from Ward No.45, asked the Mayor if the LED lights project was a lottery system as no lights had been installed in her ward. Gurvinderpal Singh Bunty, councillor of Ward No.66, said a detailed report on the LED lights project needed to be presented on the table by the officials. “There is no information on quality and quantity of the lights used; when the tender was passed; and how these would be maintained,” added Bunty. Likewise, Ward No.65 councillor Anjali said who was having the contract of the LED lights and when it would be completed. To this, the MC Commissioner assured that the street lights project would be completed by March and April. Bhatia further demanded the recruitment of new sanitation workers.

Tanmanpreet Kaur, councillor of Ward No.1, started her question by lifting a water bottle filled with contaminated water. She said people living in Indira Colony were forced to drink unsafe water. Despite complaining on several occasions about the damaged pipe lines, no action was taken, she added. It has been almost 10 months since Indira Colony residents were getting the dirty water supply.

Shushil Kumar, after raising a question on the bio-mining project, questioned the accountability of MC officials on the street vendor’s policy. He said though financial help was provided to street vendors during the lockdown, it was reported that a large number of street vendors didn’t receive it.

Similarly, Aruna Arora, councillor of the Model Town area, asked who was “siphoning off” the earnings from street vendors. Des Raj Jassal, councillor of Ward No.81, said despite the utilisation of around Rs20 crore, blue boards were not installed in major locations and colonies in the city. He said the MC had become a den of corruption.