Lay siege to Jagraon bridge; commuters suffer as they remain stuck for an hour 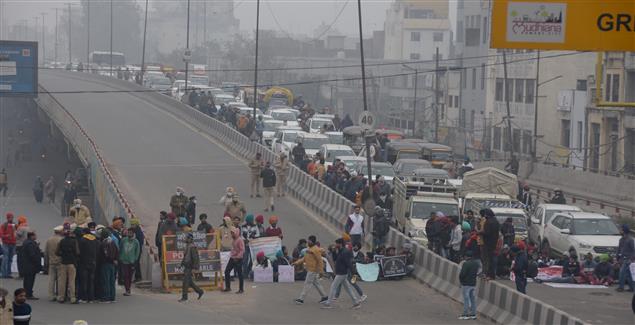 Condemning the postponement of the Army recruitment exam, youngsters in a large numbers laid a siege to the Jagraon bridge on Saturday. Due to the protest, traffic remained stuck on the bridge for over an hour which caused huge inconvenience to the commuters.

These were those youngsters who had appeared in the physical fitness exam for the Army recruitment in 2020 but they could not give the written exam till date.

In October, the candidates had also staged a protest outside the DC office as the written examination was being postponed repeatedly.

“Over 2,000 boys had appeared in the fitness exam in December 2020 at Khanna in Ludhiana. As per the schedule, the written exam was supposed to be held in January 2021. Whenever our exam date comes close, the authorities postpone the exam by giving the excuse of Covid spread,” alleged protesters.

Protesters said the exam was postponed for around 10 times and this is nothing but the lackadaisical attitude of the authorities holding the exam.

“The common entrance exam for the recruitment rally under the unit headquarters quota for the Sikh Regimental Centre, Ramgarh Cantonment has been cancelled and the new date for the exam would be announced later,” a protester shared a message received from the authorities.

When the Punjab Police could hold the exam of head constables in which lakhs of students had appeared, why this Army recruitment exam is being cancelled again and again, alleged protesters.

Protesters said they had spent a huge amount on taking coaching for the exam’s preparation and if the authorities will continue to postpone exam repeatedly, they may have to rejoin the coaching classes again.

The protest was lifted after over an hour when officials from the district administration and police administration assured the protesters that their demands would be conveyed to the authorities concerned.