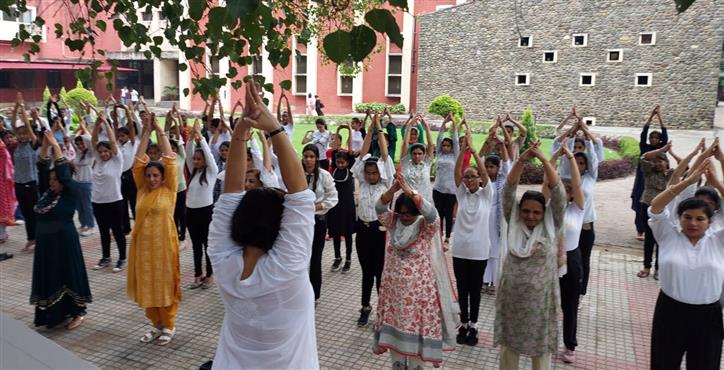 In what appears to be a sustained campaign against the rising menace of drugs, the district administration has launched a novel initiative, ‘Healthy campus campaign’, to free all educational institutions in Ludhiana district of drugs, officials have said.

Reformed drug addicts and experts from the Health Department are roped in to give practical insights into the gloomy life and vicious cycle of drug addiction. — Surabhi Malik, Deputy Commissioner

Aimed at touching each and every student in the state’s biggest and largest district, in terms of area and population, the first-of-its-kind anti-drugs drive has so far been able to take pledge against drugs from at least 1.5 lakh students from almost 100 schools, colleges and universities across Ludhiana, the administration has claimed.

“We will not use drugs and will also not let our fellow students, friends, colleagues, neighbours, family members and relatives to do so,” young students, mostly from higher education institutions, have pledged during special functions being held on their respective campuses.

Deputy Commissioner Surabhi Malik, who is the brain behind the initiative, told The Tribune here on Monday that the district administration had put in place a comprehensive plan to tackle the menace of drug abuse and make Ludhiana a drug-free district.

“Focus has been laid on identifying drug hotspots, conducting information, education and communication (IEC) activities with concerted effort of key stakeholders — police, health and sub-divisional magistrates (SDMs), who are made nodal officers for their respective sub-divisions to act as a conduit and overall in-charge of the campaign,” she said.

The DC said the ‘Healthy campus campaign’ was a preventive strategy, under which the district administration had laid its special focus on higher education institutions, university campuses, schools and reaching out to the community to garner community involvement and ownership of the campaign.

“Accordingly, meetings have been conducted with heads of various schools, colleges and universities in the district and they have been taken on board to spread awareness among youth about the menace,” Surabhi added.

Khanna ADC Amarjit Bains, who is the nodal officer of the campaign in the district, said at sub-division levels, various events, speeches, painting, declamation and other competitions were being organised at schools and colleges to take the message of anti-drug campaign to the last mile.

“For instance, Dhamot village of Payal tehsil has been declared as a drug hotspot by the police. An anti-drug awareness programme was conducted at the village gurdwara wherein students of a government school took out a rally from the campus to the gurdwara, raising slogans against the drug abuse,” he said.

Bains said the administration also organised a marathon and tree plantation drive to create awareness against drugs and to present a united front against drug abuse. “The theme of ‘Ludhiana against drugs’ was rightfully capturing the enthusiasm of the participants as more and more students and teachers were joining the campaign on a daily basis,” the ADC said, adding that youth participants, being most vulnerable to the menace, were made aware about prevention, effects and treatment of drug abuse.