Deceased were staying in a migrants’ vehra; he used to stalk mother of kids 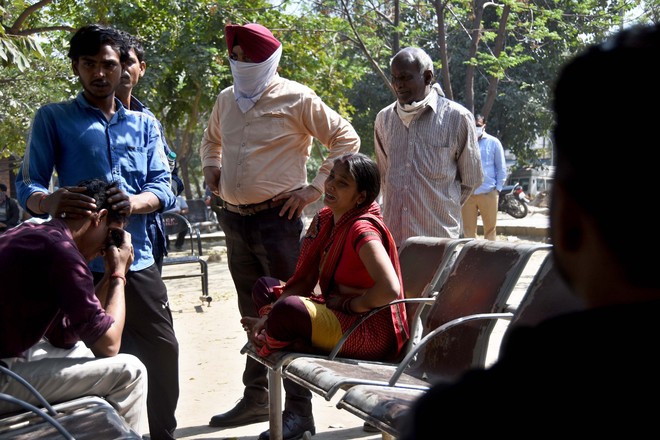 The wailing kin of the deceased children at Rajiv Gandhi Colony in the Focal Point area in Ludhiana on Saturday. Tribune Photo: Himanshu Mahajan

The accused and the children were living in a migrants’ vehra (a common place where mostly migrants stay).

The accused used to stalk the mother of the children due to which her husband indulged in a scuffle with him which led to their killing and suicide by the former.

There are thousands of illegal vehras in the industrial hub where migrants are being given rooms for rent without knowing their criminal background. Despite the Police Commissioner have strictly asked vehra owners to get police verification of all tenants done but most of them are paying least regard to directions of the top cop. In this incident as well, the person who killed the children was also living along with his uncle without police verification in a vehra. The police are going to register a case against the vehra owner under Section 188 of IPC. Many crime incidents, including rape or sexual assaults, have been reported from such vehras.

Rupinder Kaur Sra, Additional DCP 4, said as per initial investigation, Shalinder Kumar, a native of Bihar, committed suicide after murdering two children. The kids have been identified as Rajnish (8) and Manish (6), sons of Shiv Shankar Tiwari, a native of Behraich in UP and at present residing in the Rajiv Gandhi Colony.

The incident occurred this morning at around 10.30 am.

As per information, Shalinder had been stalking the mother of the deceased children for the past two-three days and he had also proposed her for friendship. Yesterday, he husband had complained to the vehra owner about the matter after which, the latter had asked the accused and his uncle to vacate the room. Following this, the accused turned furious and threatened him of revenge.

Today, when the children’s mother went to the washroom to wash clothes, she left her children in the room. The accused finding the kids alone in the room, took them to his room.

“The accused locked the room from inside and brutally slit the throats of the children. Later, he committed suicide by hanging himself from a ceiling fan. The woman after listening to the shrieks of her children raised an alarm following which people broke open the door and found the kids’ bodies in a pool of blood. Shalinder’s body was found hanging. Later, they informed the police,” Additional DCP Rupinder told The Tribune.

The accused was staying with his uncle in the vehra for the past two years. The vehra owner had also not done police verification of the accused and the police are going to register a case against the owner under Section 188 of the IPC.